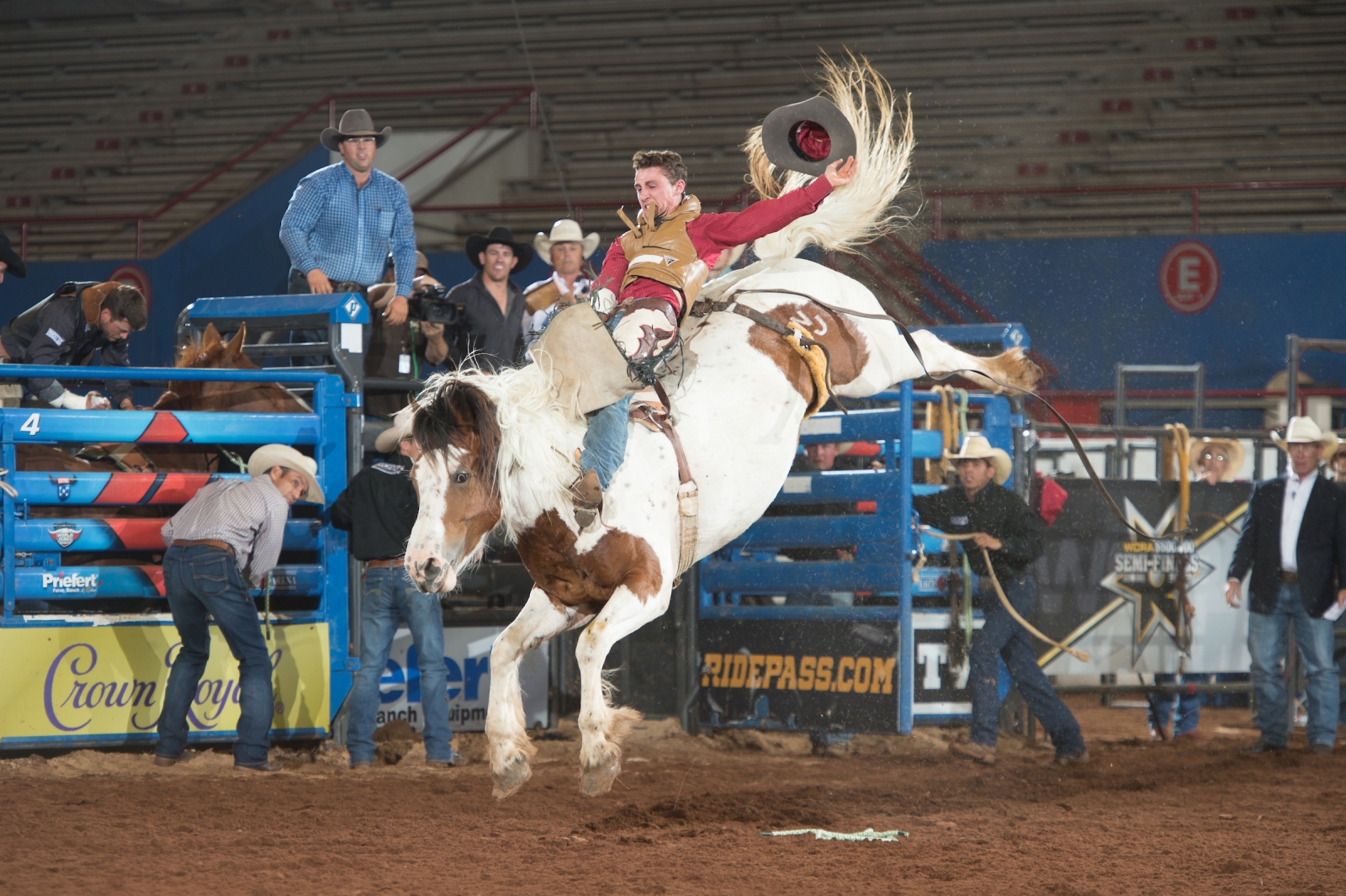 Garrett Shadbolt is pictured above at the WCRA Semi-Finals in Guthrie, Okla. on May 19, where he took first place with an 88 point ride. Photo by Bull Stock Media

Garrett got his start riding bucking horses his junior year of high school, where he competed in a ranch bronc event in Gordon. After graduating in 2014, he hit the rodeo trail hard, and eventually landed in the WCRA (World Champions Rodeo Alliance). The WCRA is its own rodeo association, which anyone can enter, and is different than the PRCA in that there are fewer rodeos with larger payouts.

Some may say that the $9,000 he won for two rides, or 16 seconds of hard work, sounds easy enough, but Garrett stresses that he doesn’t make that money in eight seconds; a lot of work goes into those rides before they can happen. He has to plan what rodeos to go to, whether he will fly or drive, pay for fuel and other travel expenses, shell out entry fees, and most importantly, actually ride a 1,200 to 1,500 pound horse that doesn’t want him there.

To prepare for these rides, Garrett lifts weights and does sprints, but most importantly, he ranches. “I think the thing that helps me the most, honestly, is riding horses. I spend a lot of time in the saddle, so I think that helps,” he said. Before he rides, he gets warmed up by stretching and getting his muscles relaxed. He then religiously drinks a Red Bull. What he doesn’t do much of though, is thinking. “I don’t try to think about my ride too much before, unless there is one thing I’m trying to improve in my riding I’ll try and think about that a little bit. When it comes right down to riding time, its pretty beneficial to have a quiet, focused mind. Once you’re at the rodeo, the time for thinking about your ride is over, and its time to compete.”

Shadbolt says that when he first started riding, those eight seconds went really fast. The more bucking horses he gets on though, the slower time goes. No matter how fast or slow that times seems to go, Garrett always know when the time is up. “I absolutely know exactly, whistle or no whistle, when its been eight seconds,” he laughed.

He has also been fairly lucky as far as injuries go, but he did break his eye socket at a high school rodeo his senior year in Arthur, Neb., and his face was swollen for his graduation.

When asked what advice he would give to kids who look up to him and want to do what he is doing, he simply said, “Hit me up. Call me.” He then went on to say, “I’m more than willing to help. I can help get you started; everybody has to start somewhere.”

Garrett also stresses that you have to strengthen your mind, as well as your body. If he has a bad ride, he doesn’t focus on it or let it get him down. “For me, the bad ride didn’t happen. If I don’t know why it happened, I pretend it didn’t happen. If I make a mistake, I review it, and try to never make the same mistake twice. The mind is weak and the body is strong; you can do a lot more than you think, you just have to be able to think you can.”

While Garrett definitely has goals for himself, such as going  to 100 rodeos this year and being named Rookie of the Year, he says the most important thing to him is to glorify God in all he does. “He has given me this talent, so I want to do things for Him. I just want to be a blessing to people.” Shadbolt says that when he is riding bucking horses, he is playing with fire, so it is important to have your motivation in the right places.

Looking forward, Garrett competes in Green Bay, Wis., at the WCRA Finals on June 1, and hopes to keep his momentum going. If Garrett wins in Green Bay, he stands to take home a $50,000 check.

“I really want to thank my wife, Katie, my family, and my community. The amount of people who congratulate me is pretty cool, and it wouldn’t be like that in other places.”