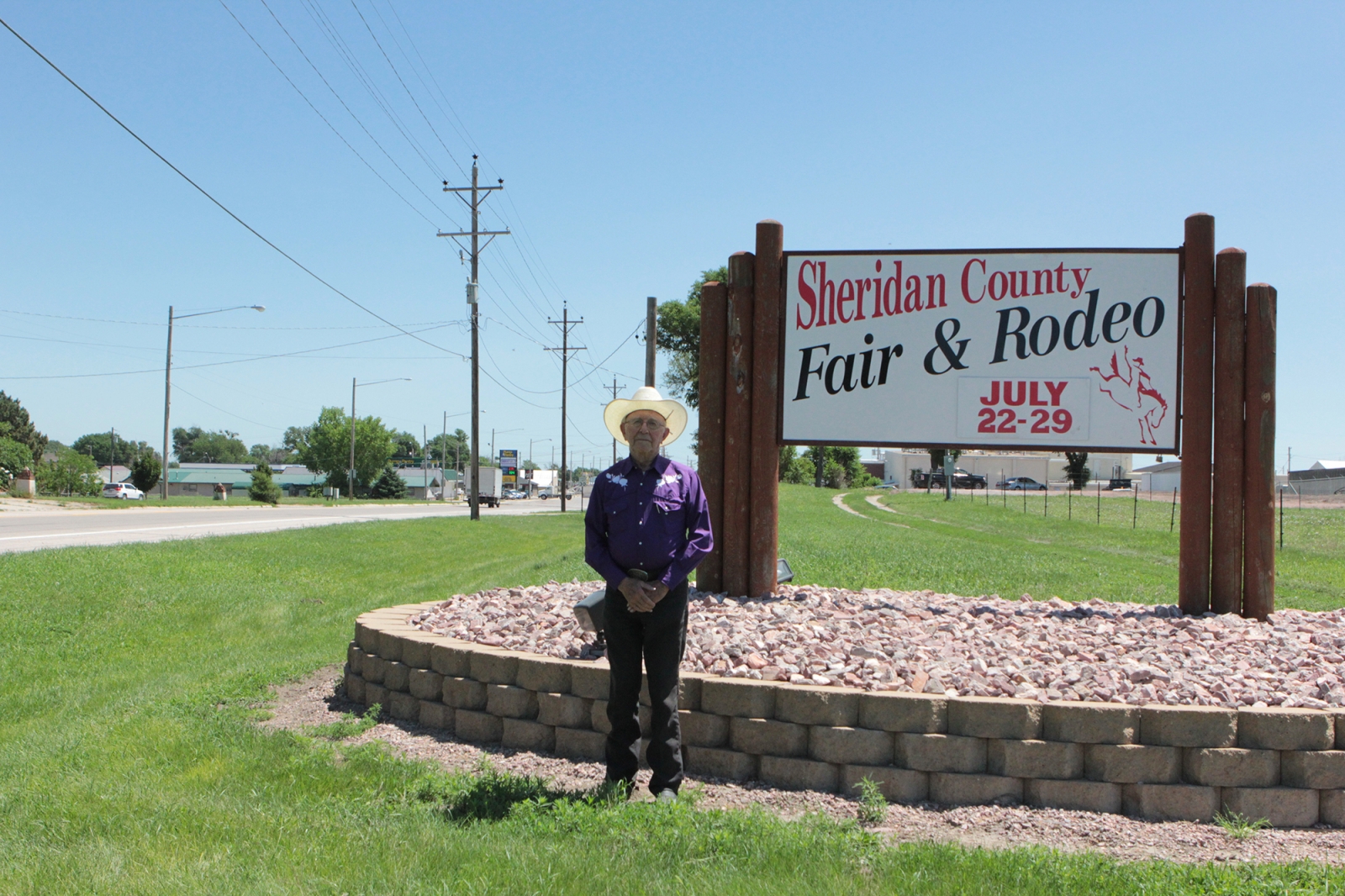 Willis Gran, the 2019 SCF&R Parade Grand Marshal, stands by a sign welcoming people to Gordon for the Fair and Rodeo events. Photo by Rachael Huether

The 2019 Sheridan County Fair and Rodeo parade Grand Marshal has been named: Willis Gran. Likely a stranger to few in the area, Willis has devoted much of his life to volunteering on various boards and organizations in Sheridan County. Along with serving on the Sheridan County Ag Society board for 32 years, Willis has also been an active member of the Gordon Lions Club for 47 years, the American Legion Post #34 for 65 years, the Willow Tree Foundation for 20 years, The Sheridan County RSVP, Tri-State Old Time Cowboys, and the Knights of Columbus for 58 years.

Born on April 21, 1933, in Winner, S.D., Willis grew up with six sisters and one brother. His family moved to the area in September 1949, when his family took over the Mission Ranch northwest of Gordon owned by the Catholic Church in Pine Ridge. The Grans were welcomed to Sheridan County with one of the biggest blizzards we’ve ever seen. After completing his last two years of high school in Rushville, Willis graduated with the Rushville High School Class of 1951.

Upon completing his high school education, Willis joined the U.S. Army. “I knew I was going to be going into the service, so I joined in 1953.” He was stationed in Missouri, Virgina, and California, before going to Korea, where he helped operate a salvage yard. While doing maintenance on a jeep one day, the company commander called Gran and said ‘Would you take this officer to Seoul?’ “From then on for the rest of my time, I was jeep driver for our company commander,” Gran noted. One night at the evening meal, a young man from Kansas City approached Willis and said, “Gran, I think I’ve got somebody here you may know.” In walked Marv Roth, also of Gordon. Roth was stationed about 1/2 mile east or where Willis was in Korea.

After his time of active service was up, Gran said they were ordered to batten down the hatches, and ended up riding through a typhoon for 1,000 miles while en route back to the United States. On a train east from where they arrived in Seattle, Washington, they went through Missoula, Montana, where Gran remembers the scenery that day in May with all of the flowers in the depot. “I thought, what a site to see after two years over there. We didn’t have much to look at.”

At the time Willis was leaving Korea, the United States was starting the Armed Forces Assistance to Korea (AFAK) program. When his middle son joined the Army, he too was stationed in Korea. “It was just remarkable to look at that country when he was there. All the fine buildings; you’d have had no idea that there had been a war fought there,” Gran remarked.

Willis was employed at Gordon Propane for 30 years, and has been employed at Chamberlain-Pier Funeral Home for 20 years. In those 20 years, Willis has assisted at almost 450 funerals.

When asked why he joined the Sheridan County Fair Board, Willis remembered, “I was down at the propane store, and Harold Hupp stopped in, and there happened to be a fair board meeting coming up. He asked if I would like to attend it.”

Of all the entertainers the Sheridan County Fair has seen, Willis says his favorites have been Hank Thompson, Tanya Tucker, and Danny Davis and The Nashville Brass. He remembers the year Danny Davis played at the Sheridan County Fair, and that it rained heavily. They had two semi trucks on either side of the band, with a tarp stretched between them over the band to protect them from the rain while they played. “It was a number of years later that our family had a get together for my mother in Branson, Missouri, and Danny Davis had played there. He was coming down from the stage, and my wife said ‘why don’t you go talk to him?’ so I stopped him and said ‘Do you remember when you were playing at a fair and rodeo and it rained, and rained, and rained?’ He said he remembered that, and that ‘my wife would not believe me when I told her what condition we played in.’”

Gran feels that the board does the best they can with the money they have to spend on entertainment, and that he estimates a 95% success rate with the entertainment. “Most generally, I think the community has appreciated the acts we’ve brought in.”

One of the biggest changes Willis has noticed over the years is that the rodeo used to be a three day event, and all the contestants stayed in Gordon for the entire time. At the end of those three days, all the winners would stand together at the chutes and take a photo. These days, many of the contestants leave when they are done with their events and head to the next rodeo. He has also noticed a sharp decline in the number of bareback riders who enter in rodeos nationwide. As far as what has stayed the same, Willis says he has always been impressed with the quality of announcers that come to Sheridan County. He also notes the addition of more events for kids, such as the Jr. Rodeo and Mutton Busting.

Willis also remembered a time at the Sheridan County Fair and Rodeo in 1962 that he rode a bull. “I thought, ‘Oh my Lord, what have I gotten myself into?!’ but I thought, ‘I’m not backing out!’” At that time, his wife was about one month away from delivering their first child. “Sometimes maybe our good judgment takes a backseat to our toughness,” Willis laughed.

When asked for advice for young people, and why they should volunteer, he responded, “The area where you live, they are contributing a lot to you. So it would only be somewhat fair if you could make a contribution back of some sort.” He then added, “If you could, do what you know you should do, and then just a tad more.”

Willis married his wife, Lois, on April 11, 1961. They had five children together, David, Denise, Diane, Damon, and Dustin. Lois passed away in 2015. When asked how he would like to be remembered, Willis replied, “He was a good man in the community. He raised a fine family, with a little parenthesis there that his wife was much better than he was,” he said with a laugh, “or that his wife made him what he was.”

To be named Grand Marshal of the Sheridan County Fair and Rodeo Parade is quite an honor, Willis said. “My first thought was, ‘I didn’t do anything to deserve that, I’ve only been a member.’ I looked around and thought, ‘my gosh, there could be people more valuable to the organization than me,’ but I tell you I had no idea until the meeting when they announced that I would be Grand Marshal. And I thought,’ my, this is for people of importance,’ but I was so pleased, too.”