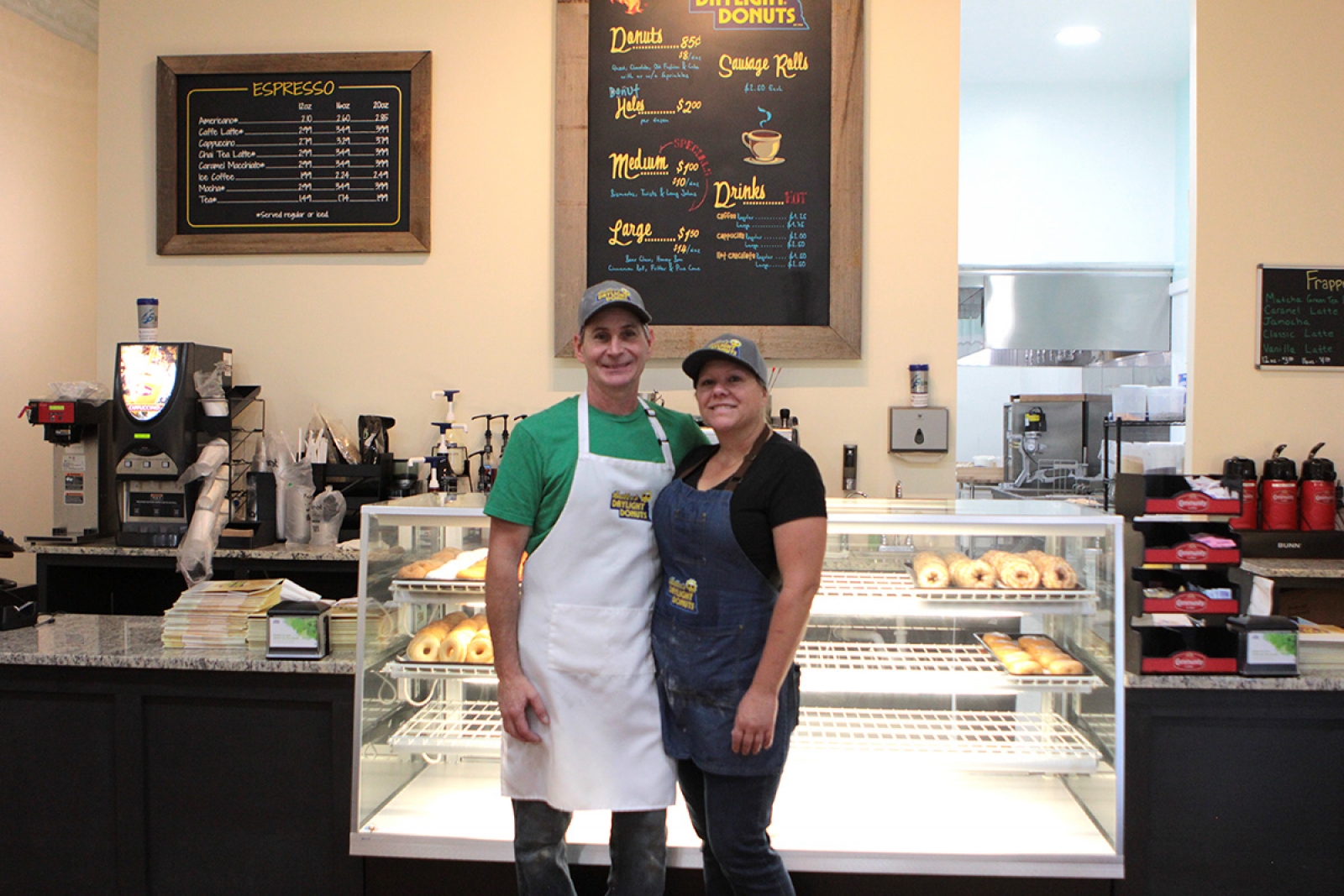 Jeff grew up in Gordon until age 17, when he moved away and then joined the military. Then, six years ago, he and his wife, Kerry, were trying to choose a vacation spot for their family of four. “We were having fun with it, kind of like open the map and throw a dart and where would you like to go conversation. And we said ‘Anywhere in the world. Europe, where? What would you like to go do?’” Jeff said. Kerry added, “My youngest wanted China, he was fascinated with China!” Places like Italy, Florida, and Nebraska were also thrown out as possibilities. Their daughter asked if she could drive a tractor in Nebraska, and their son asked if he could shoot a gun. The couple responded, “Yeah, we’re pretty sure we can make that happen!”

So, they packed up and came to Gordon for a summer vacation, and Kerry really liked it here. “We got to talking about what are we going to do differently because work was so busy in San Diego, and we were just getting tired of the stress, or just competing to live in a big city,” Jeff stated.

“So we came out here and went house shopping, but it must have been an off season (as there wasn’t much available). The conversation was a house here for the summer, and going somewhere else for the winter. It was kind of sad, burst my bubble a little bit! Then we were driving down Main Street and I see a for sale sign on this building. I thought it could be kind of fun living on Main Street!” Kerry remembered. They went back to Jeff’s sister, Julie Walton, and her husband, Casey, and asked if they knew who owned the building. “Fifteen minutes later we were looking at the building! Jerry Saub was giving us the grand tour and history of the building. The wheels started turning in my head, and we made an offer. After some back and forth, we came to an agreement, and Jerry wanted to live here for two to three years,” she added. After closing on the building in the summer of 2018, they were informed that Jerry’s plans had changed, and he would be moving out. “Our whole plan went out the window!”

Kerry moved to Gordon after the purchase to acclimate to small town living. Their original plan was to focus on the apartments upstairs, and then lease out the commercial space downstairs, but during the transition, she researched different business ideas and asked around what locals would like to see on Main Street. That research led them to Daylight Donuts. They sold their home in October of 2018 and started full construction on the donut shop. While Jeff tackled the building overhaul, which would be stressful to most but enjoyable for him, Kerry joined the Gordon Rescue Squad and tended bar at the Legion to meet people.

“I couldn’t go from Homestead to here without someone asking when the donut shop was opening! Everybody was excited, and we hadn’t even opened the door!” Jeff exclaimed. Butler’s Daylight Donuts held a soft opening on Sunday, June 2, 2019, with their official opening day of June 3.

Since opening in June, the Butlers have immersed themselves into the business and the community. They have learned that the donut making gig is a physically demanding one, but also very rewarding. “I had the best experience the other day: a mom pulled up with two or three little kids, and you could tell one little girl was just mad. Just stomping her feet, mad and pouty, kicking and not having it. Had a sourpuss look on her face and a frown, by the time she got to the door her lips were straight, and by the time she got to the counter she had bright eyes and a big smile and had her nose pressed against the case,” Jeff said. “I wanted a job that made people happy, so I figured donuts kind of worked. If I make somebody mad making a donut first thing in the morning, I’m really doing something wrong.”

Jeff starts his day at 2:00 a.m. making the dough for donuts. He and their full-time employee, Emily, get to work making the donuts, and Kerry joins them between 4:30 and 5:00 a.m. to finish up and open the shop. It takes two hours from the time they start making dough to end up with a finished raised donut, and cake donuts are a bit faster. On an average day, the go through 57 pounds of dough, or roughly 700 donuts. For their Grand Opening, they made 1,250 donuts. Jeff says it has been trial and error to figure out exactly how much to make. He gave an example of having an empty showroom, and having to guess exactly how much lumber and nails you would need to set out to completely sell out each day, which is a much different business model than most businesses.

Now that they have perfected their donuts, they have been branching out and experimenting with new products. They have introduced birthday donuts, which are dinner plate sized, sausage rolls, and frapés. They are also experimenting with smoothies, and are always dreaming of what’s next.

“It has been overwhelmingly positive. It has been hard for us to know how to accept that! This is what’s blowing us away: yeah, we’re putting in a lot of hours, we’re doing our part and our work, but that’s what every new business does. Then you sit back and see if its accepted. That hasn’t happened to us. We had people pushing the door in!” Jeff stated. Kerry added that, “The response from the community has been overwhelming. That’s super cool, and appreciated!”

Stop by and grab a delicious donut from Butler’s Daylight Donuts Tuesdays through Sundays from 5:00 a.m. to 12:00 p.m.!