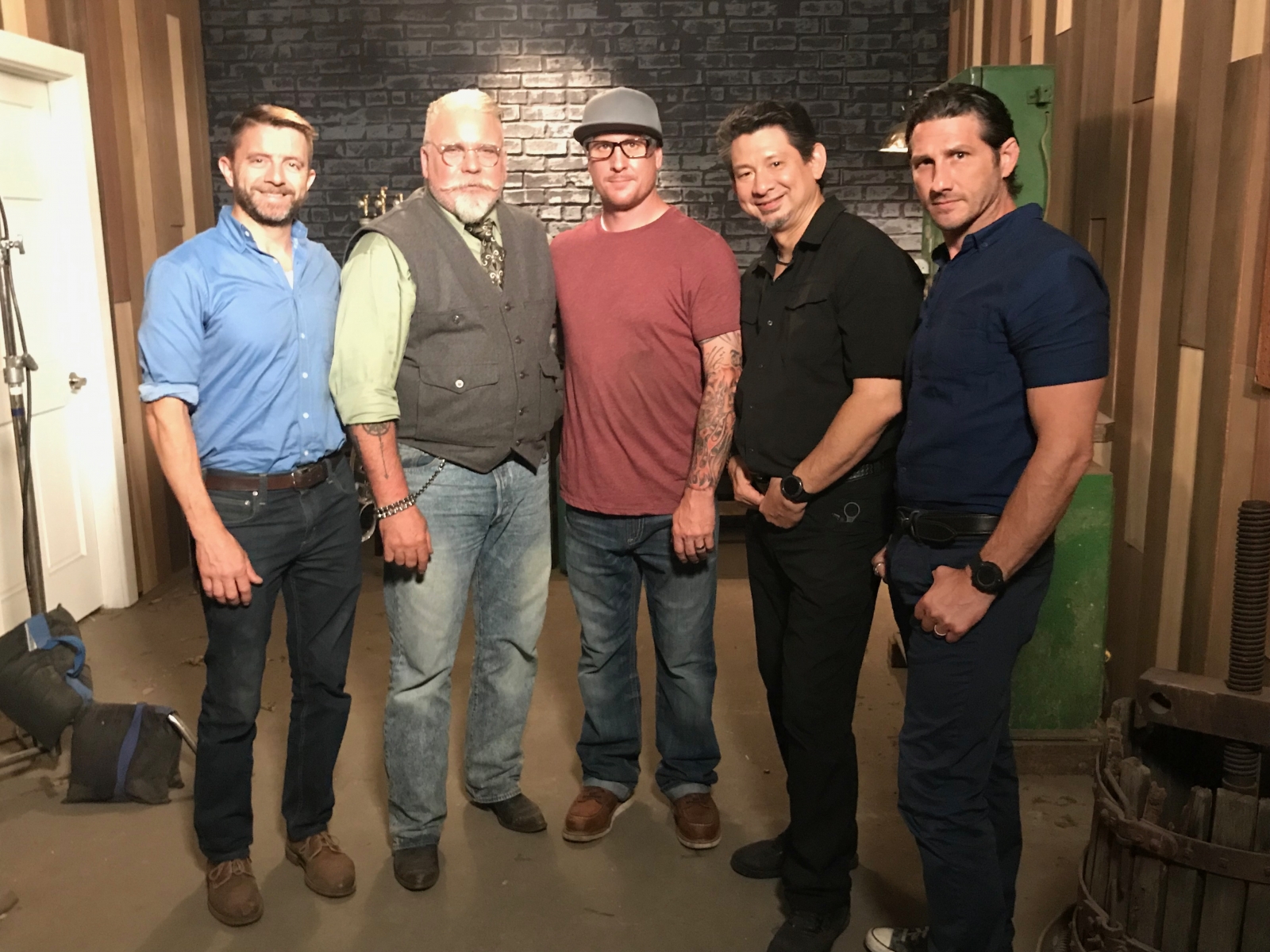 Jason Tiensvold (center) stands with the judges of Forged In Fire. Photo submitted

Master Smith Jason Tiensvold of Rushville recently had the opportunity of a lifetime when he was invited to compete on the television series Forged In Fire. The History Channel program features a competition between bladesmiths as they attempt to recreate some of history’s most iconic edged weapons.

Tiensvold was contacted by the show last year and had to go through several interviews and reviews of past work before being selected. A few months later, he received a call that he was chosen for a show in August and would be flying to Hartford, Connecticut.

Jason was allowed to bring three items he felt would help him in the competition – a difficult task considering he had no idea what he would be asked to create. He decided on his grinding jigs, his hammer, and his apron.

He was not allowed to bring anyone with him to the show, but ended up running into fellow Nebraskan, Journeyman Smith Peyton Ramm of Valentine at the hotel. Tiensvold, having earned his American Bladesmith Society Masters in 2004, is able to test other knife makers for their Journeymans and Masters, and had tested Ramm for his. Having been forbidden to tell anyone about their participation in the show beforehand, neither man knew the other would be there.

For Jason’s first challenge of the competition, he had to make a knife of his own design, with a through tang, out of materials he found inside a clay crucible. Tiensvold’s crucible contained two different types of steel he used to make Damascus.

The competitors had three hours to complete their blades, and in that time, also had to do three interviews while the clock ran. “When they come to you, you have to put down whatever you’re doing and sit down and answer their questions,” Tiensvold explained. “And they tell you right up front that if you don’t answer their questions the way that they think that they should be answered, that they’ll stand there with you until you do answer them that way.”

His last interview came with only ten minutes left on the clock and about 45 minutes worth of work to do.

Tiensvold also had to deal with 120 degree heat from the four forges nearby and having a camera man in his face throughout the competition. “You have one camera guy that’s assigned to you and he’s in your face all the time,” he said. “They tell you you’re not allowed to touch the camera man. You can’t push them back or anything. Every time you turn around the camera is right in front of you, and they’re following you around.”

Despite the inconveniences, Tiensvold was happy with his blade and made it to the second day of the competition.

On day two, the competitors were given two and a half hours to make a guard and handle for their blades. The first step was to cast their own guard by melting down bronze and pouring it into a mold of sand. Tiensvold had never done casting before, but had stayed up most of the night doing research, and was able to make a guard he was happy with before spending the remaining time finishing his handle. Overall, he was happy with the blade, but not so much with the handle.

The first test was to see if the knife would chop through a cinder block. Jason’s was the first to go. His knife successfully chopped through the block, but as the judge held the knife out, the handle broke in half. He wasn’t immediately eliminated, because the other two contestants still had to pass the test.

In hindsight, Tiensvold says he would have given himself more time for his handle. He would have liked to have welded all-thread rod onto the end to thread a pommel onto it, but wasn’t able to find any in time. “It was really difficult in there, because when you get to the show, they only let you walk through the studio for like five minutes… so you don’t know where anything’s at material-wise.”

He also regrets not leaving enough time for the handle. “The hardest thing for me was to walk away from my knife. If I would have just walked away from the blade and said, ‘it’s good enough’, and concentrated on my handle, I would have been way ahead. As a knife maker, you’re kind of a perfectionist. When you’re making something at your shop, you don’t work on something, even if you know that it’s not quite right, and leave it. You always work on it until you’re happy with it. On that show, you don’t have time to do that. I knew that going into the show, but things are going so fast, you get wrapped up in it. I could not step away from my blade and say that’s good enough, and start working on my handle. By the time I got my blade to where I was happy with it, I didn’t have nearly enough time to finish my handle.”

The show airs Wednesday, January 15, at 7 p.m. MT on the History Channel. The show will also be available to stream at history.com after it airs.

Jason’s knives can be viewed online and can be ordered by emailing Tiensvold Custom Knives at This email address is being protected from spambots. You need JavaScript enabled to view it.