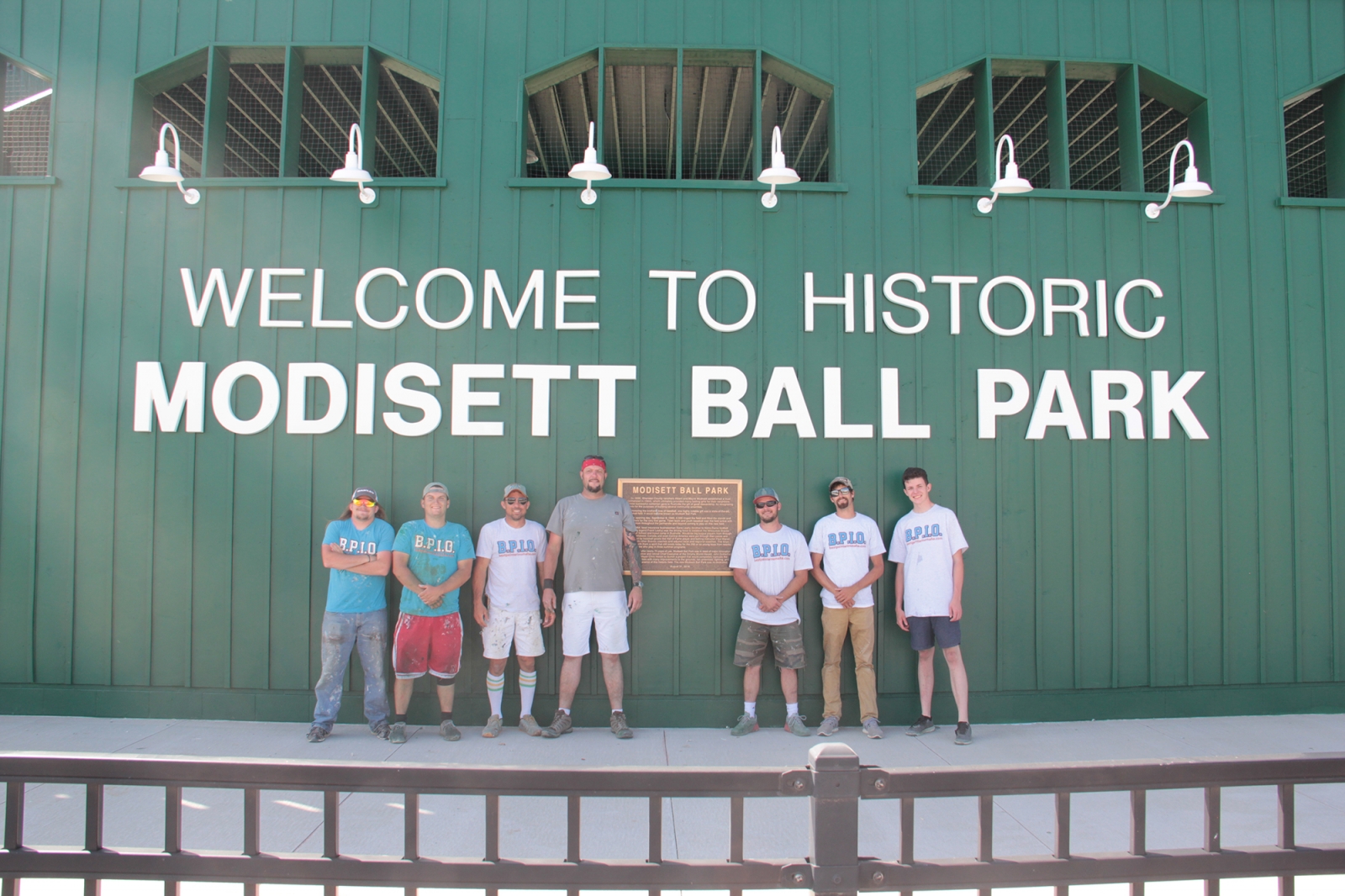 Cory Shedeed and six of his employees traveled to Rushville from the Omaha area last week to re-paint Modisett Ball Park. Cory has his own painting company, Cory Dean’s Painting. Photo by Rachael Huether

Rushville alum Cory Shedeed, of Cory Dean’s Painting in Omaha, along with his crew of six, could be seen at the Modisett Ball Park in Rushville last week, giving the buildings a fresh coat of paint.

A 1991 graduate of Rushville High School, Shedeed talked about playing baseball at the Modisett Ball Park growing up. “My first year playing baseball was in little league for the Hinn’s Hornets. Lorna Hinn was my coach. After that, we started Legion Baseball. We played all of our games at Modisett Ball Park. My coaches were John Tausan and Mark Loosvelt - two of the best coaches a kid could have asked for. We actually traveled to Wakefield, Neb., (by Norfolk) to play in the state tournament. Baseball is great for the whole town.”

In 1996, Cory started his painting business, at the young age of 24. “My business name is Cory Dean’s Painting. Dean is actually my middle name, but it is a lot smoother so I decided to go that route,” he noted of the name. If you noticed his vehicles at the Ball Park, you may have noted the phrase, ‘Best Painter in Omaha,’ on the sides, and on the team’s t-shirts as the acronym of B.P.I.O. Cory stated, “The best painter in Omaha came in when I had a young man working for me who messed up a lot. He always said, ‘I hate to disappoint the best painter in Omaha.’ So I just kind of made it work. And it stuck.”

Cory received a call from Kirk Beguin, Street Superintendent of the City of Rushville, to ask if Cory would be interested in submitting an estimate for the paint job. “He said, ‘Why not have someone who grew up here and went on to become the best painter in Omaha do it?’ ” Cory stated.

Chuck Hinn donated the 76 gallons of paint used in the project, which took Cory and his team seven days total: one day to power wash, two to scrape, prime, and caulk, three to paint, and one day to do the trim.

Shedeed has eight employees working for him right now, and six of them were able to make the trip with him: Scott Dogget from Gretna, Mick Crockett from Gretna, Lou Vaughn from Omaha, Jackson Vaughn from Omaha, Cody Oliphant from Glenwood, Iowa, and Andrew Hughes from Omaha. “I really appreciate the town of Rushville showing all of my crew a good time. The hospitality was amazing. Everybody was talking to us about the job and why we were there. It was nice to get the city boys in a small town and show them what the good life is all about,” Cory said.

“It takes a community. Every night we had something to do after work. We ate a lot of pizza from the Twisted Turtle, went golfing in Rushville, went to the Gordon Country Club to go golfing, went fishing, ate breakfast at Farmhouse Coffee, played pool at the 20 Bar, and got fed a free meal at Rush Creek Roots for their one year anniversary. We stayed at the Nebraskaland Motel, which is perfect because they had a kitchenette,” Shedeed said of their time in Sheridan County. He also noted he was able to drive his crew by the ranch where he grew up. “A couple of the guys were very excited also because we got to see a true Longhorn, which are Bernard Strong’s. I also got to see old neighbors and classmates and aunts and uncle’s.”

Cory also said it was nice to see teams practicing on the field, despite the challenges the teams are facing due to restrictions in place from Covid-19. They were also able to watch the first game held at the Ball Park this season on Thursday.

“I would also like to thank Stuart Kozal for providing us help when needed, and I would like to thank Bob and Donna Shedeed for their volunteer work on the job. I don’t get back home often enough, but when I do it is always great to see family and friends,” Cory added.