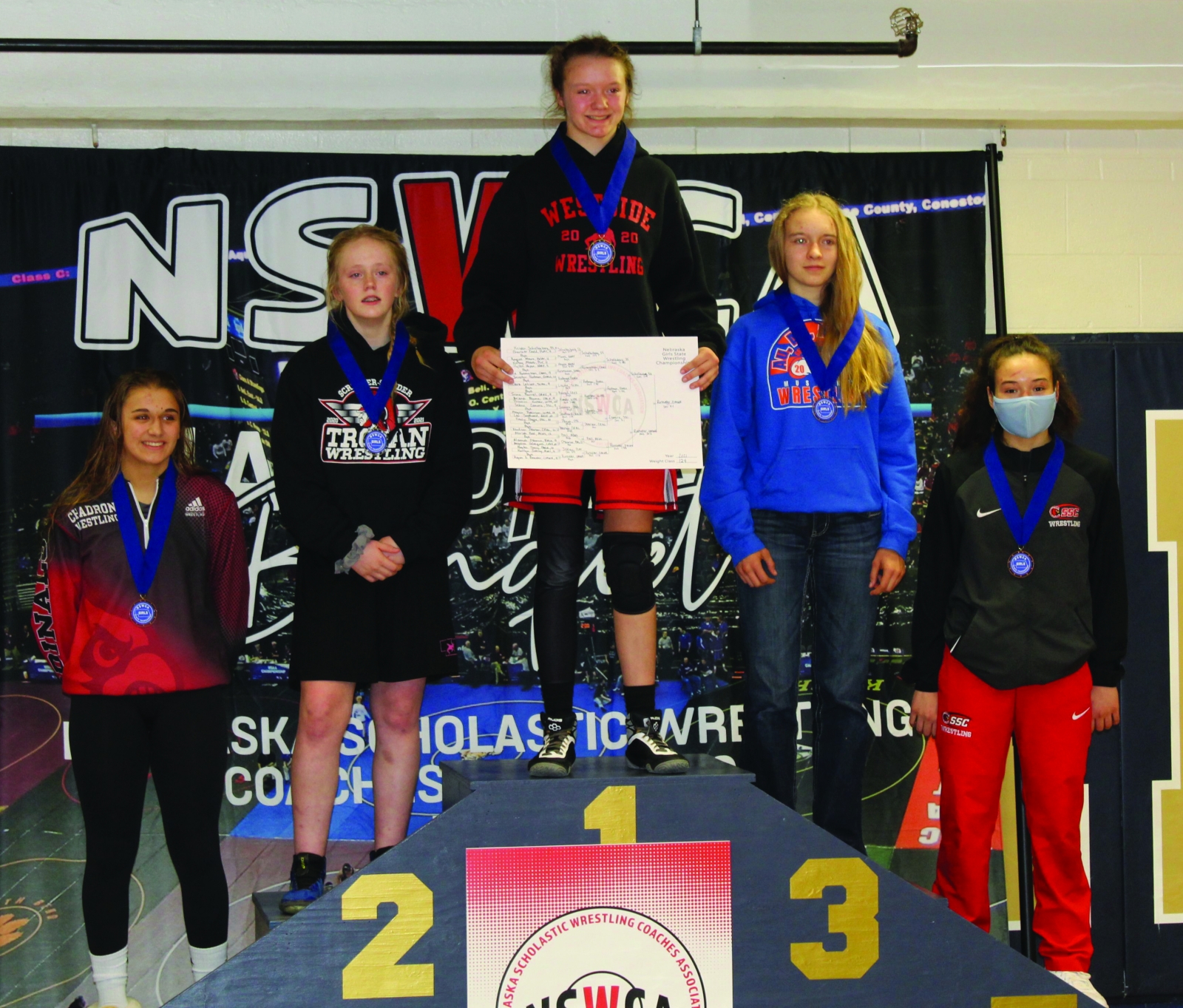 For the first time in it’s program history, Gordon-Rushville had a female wrestler wearing the blue and orange singlet. But for sophomore Josie Redman, it was not just for show.

Redman took home the bronze with a third place finish in the 124 weight class at the NSWCA Girls High School State Tournament in York, Nebraska. The tournament took place over Friday, January 29 and Saturday, January 30. She capped off an impressive season, posting a 19-6 record in the 2020-21 campaign.

Redman, her family, and coach Jose Campos made the trek east to compete in the inaugural year of the tournament.

“I was feeling nervous and excited, but also confident that I would give my best effort,” said Redman. “Leading up to my first match, I just wanted to get out on the mat and wrestle to get the tournament started,” she added.

Up first for Redman was a bout with Clara Lesiak from Schuyler. Redman pinned Lesiak at 1:35 to get the win.

Her second bout was against Brooklin Kuster from West Point-Beemer. Kuster had beaten Redman earlier in the season at Battle Creek. Redman adjusted though, avoiding the headlock, and secured the fall at the 1:32 mark.

That set-up a showdown with Kirsten Schleenberg with a trip to the championship bout on the line.

Redman battled hard throughout the match but was unable to gain much traction, dropping the decision 11-4.

After the loss, Josie dropped into the wrestle backs with a chance to earn a third place finish.

Rachel Redman, Josie’s mother and one of her coaches, praises her toughness after the loss.

“It is so hard as a wrestler when you go all out for three periods and give everything you have in you and don’t win,” said Rachel Redman. “It can be very difficult to get ready to wrestle another match within the hour when you’re feeling that way,” she added.

Redman jumped right back on the mat for a match-up with Madison Peterson of Crofton -Bloomfield. Redman secured the fall at the 2:14 mark to advance to the third place match.

A familiar foe would be waiting for Redman in the third place bout; Fia Rasmussen from Chadron.

Rasmussen and Redman are not only foes but friends. The two were all business though when the whistle blew and Redman got the fall at the 2:06 mark and earned her third place finish.

“I feel like I performed to the very best of my ability,” said Redman. “Over the summer I am going to work hard so that I can get physically and mentally stronger to have a more productive season next year,” she added.

When Coach Campos is asked about what the expectations are for Redman next season, he does not hold back.

“We look to compete for a state title next year. We were one match away from the championship. We are already excited for next season. I know Josie will put in the work in the off season to be a state champ,” said Campos.

“She stayed and watched the championship match. She is already on the hunt for what she’s up against next year to try and win a state title for Gordon-Rushville,” she added.

Redman will head into the offseason with a taste of success. But you can be sure of one thing, this is only the beginning for the Mustang wrestler.

More in this category: « Gordon’s Casey Walton Honored by Nebraska American Legion Riders Johndreau’s to bring dentistry back to Rushville »