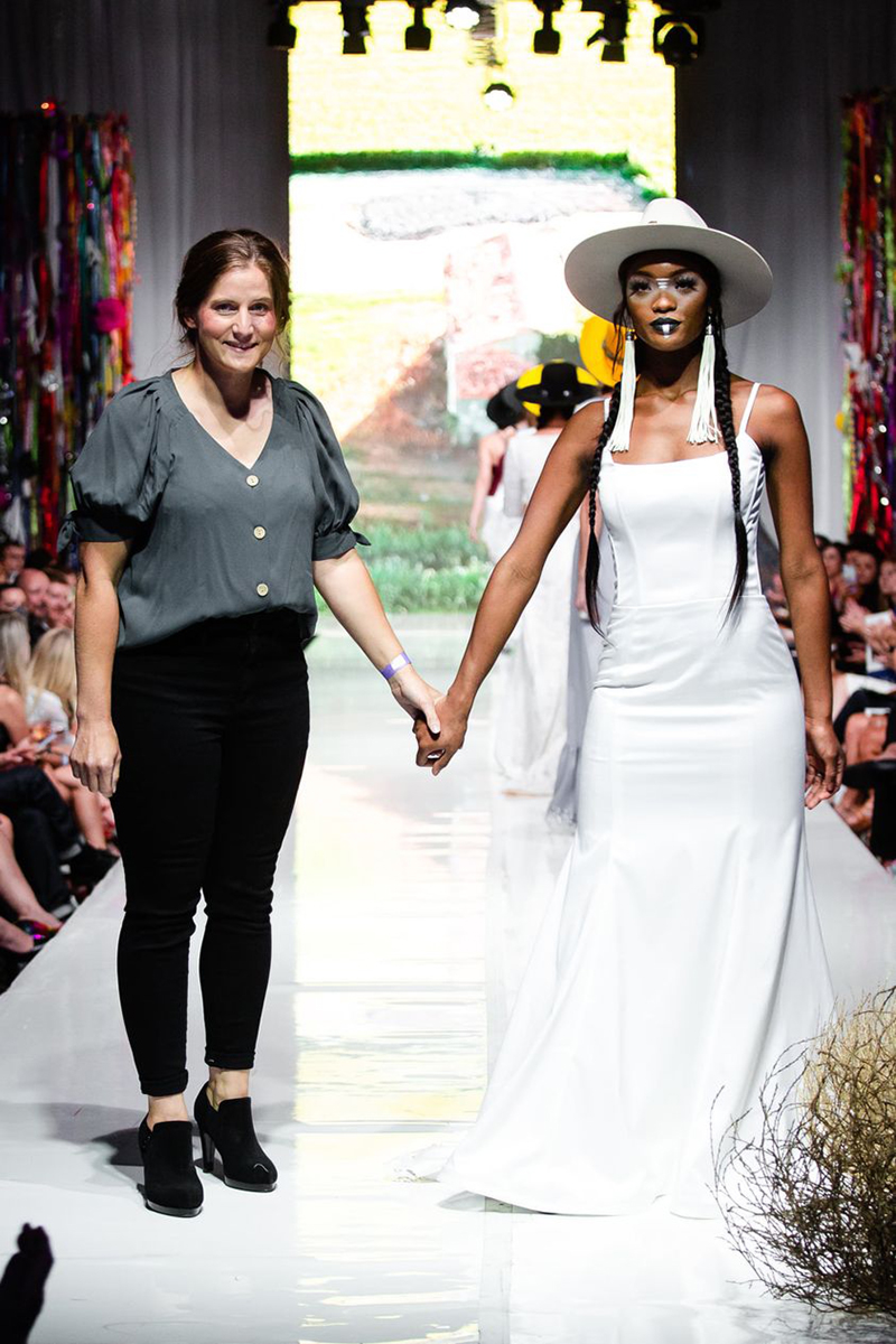 For Gordon resident Marie Nelson, months of preparation, brain-storming, and creating was crunched down into just seven minutes. In those seven minutes, Nelson’s twelve pieces she created for her showing at Omaha Fashion Week (OFW) walked the runway.

And when everything happens so fast, it’s hard to get a grasp on how it was seen by the judges. That is until Nelson received word that she was the Showcase Featured Designer Winner for the Saturday show at OFW. Nelson finished in the top spot over her twelve other competitors.

The process for the 2021 OFW began for Nelson during the quarantine of 2020. But dig a little deeper and you will realize that sewing has been a part of Nelson’s life for a very long time.

“I began sewing when I was 8 years old,” said Nelson.

“And I started in 4-H, of course,” added Nelson with a smile.

Quite befitting that the origins for sewing began in 4-H as Nelson is currently the 4-H Extension Assistant for the Sheridan County 4-H Office in Rushville.

Nelson continued on her path in sewing by earning Top Seamstress her senior year and then doing custom work on the side during her college years.

Nelson took her first dive into OFW in 2013. She has done it four more times since then, including 2021.

The process began for OFW 2021 with an interesting source for inspiration.

“The theme for my 2021 collection was Ghost Town. During quarantine, everyone was stuck at home and there was no traffic in town,” said Nelson.

Nelson also utilized a new tool to help take her collection to the next level; a laser cutter for fabric.

Using the laser cutter to provide looks that had never been seen on the runway at OFW, Nelson said she thought the new creativity would give her a chance to be at the top.

She presented her portfolio of work in her tryout, then had an online interview to present the twelve looks and fabrics. All the looks have to be completed a month before the actual show and Nelson made the trip to Omaha to have her looks photographed and partake in an in-person interview.

Nelson then set the music for her show and brought a unique addition to her show; tumbleweeds.

Nelson also had to select twelve models to showcase her pieces, with most of this process being done online.

Two models though were right in Nelson’s backyard as they are both students at Gordon-Rushville High School.

Senior Shawna Shadbolt and junior Hadleigh Hoos each stepped up to the plate to be models for Nelson and the pair knocked it out of the park.

“I wanted to have some local girls involved with the project. It gave them an experience that they had never had before and they did very well with direction and ideas,” said Nelson.

Shadbolt and Hoos had to attend a “Model Boot Camp” in preparation for the event. By participating in OFW, they were also eligible for a contract from Develop Models in Omaha.

The pair also participated in a professional photo shoot in July of 2021. Pictures were taken at the Historical Museum in Rushville and at a rural farmhouse in Sheridan County.

Nelson, through her position at the Sheridan County 4-H, offers sewing classes to both adults and children. The classes for children take place on the school days that have an early out and the adult classes are usually on a weeknight. If interested you are encouraged to call the Extension Office at (308) 327-2312.

On the website, you can shop the looks that Nelson created for her winning collection at OFW and you can fill out a contact form for any custom work you may need.

Nelson has experience in upholstery, leather work, quilting, and alterations.

She also creates custom wedding dresses, bridesmaids dresses, flower girl dresses, and has done some suits in the past.