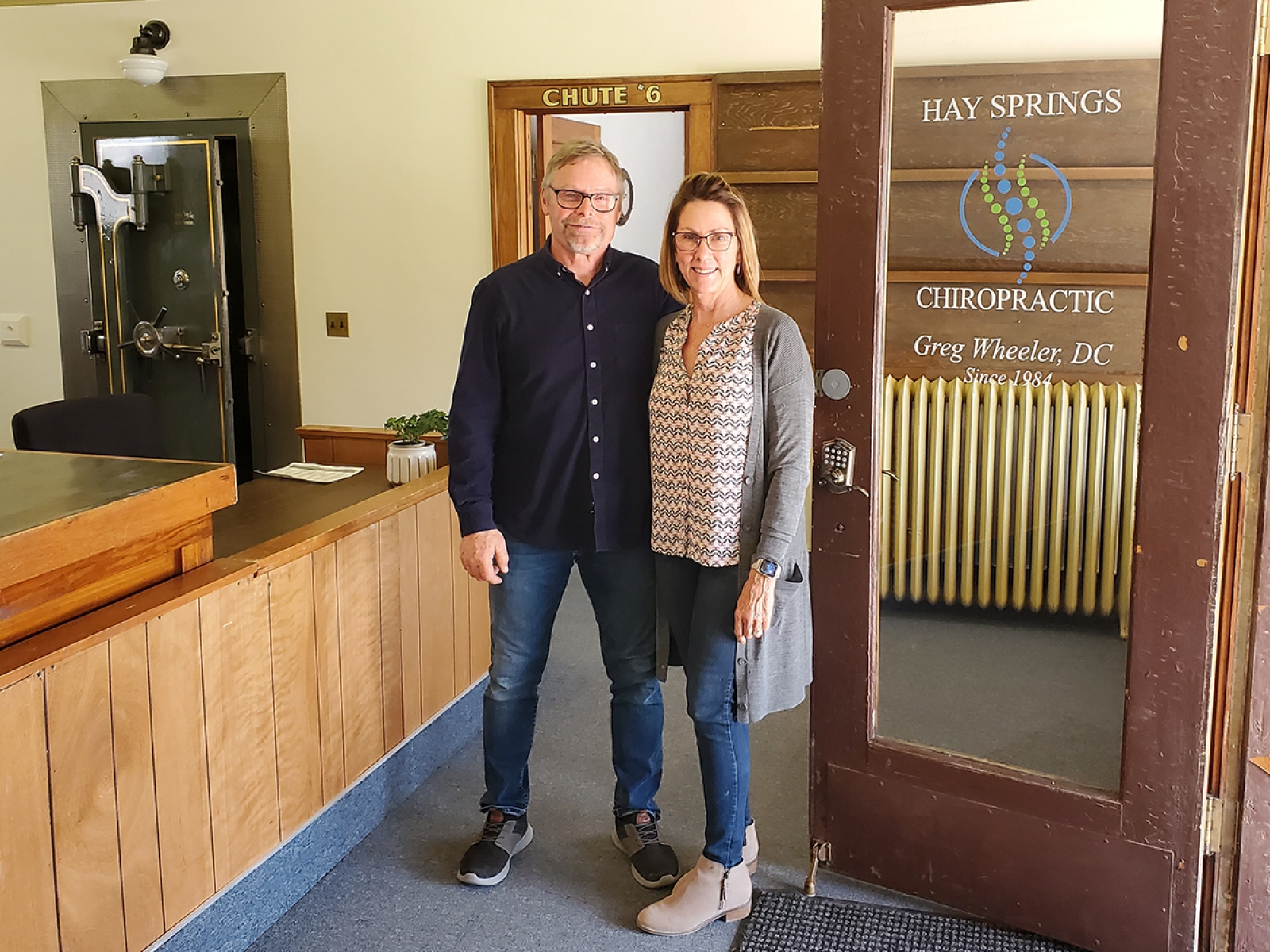 Dr. Greg Wheeler and his wife Susan have made the move to Sheridan County to get back in touch with some family roots.

And lucky for us, Dr. Wheeler brought with him 38 years of Chiropractic experience and is ready to share that resource with the community of Hay Springs and beyond.

The couple, who were married in 1986, decided to come back to Northwest Nebraska after spending the past 40 years in San Diego, Calif. and Sandpoint, Idaho. They moved into an acreage that is a few miles north of Clinton and are enjoying renovating the 100 year old home.

While the move to Northwest Nebraska might look a little random on paper, the Wheeler’s family roots to the area run deep.

Greg’s grandfather homesteaded just west of Marsland around 120 years ago, a tract of land that the family continues to farm to this day.

Greg’s other grandfather worked for Chicago & Northwestern Railroad as a telegrapher in Chadron.

And Susan’s father, Lloyd Bruce, grew up in Alliance.

“The residents here have been so kind and welcoming and willing to help when we’ve been in a pinch. There’s not much rest for farmers here and it seems to produce a kind of character you do not see other places. We really admire that,” she added.

Dr. Wheeler has practiced Chiropractic care for 38 years, receiving his education from Pacific Union College in Angwin, Calif. and his Chiropractic degree from National College of Chiropractic in Lombard, Ill. in 1984.

Dr. Wheeler states that he utilizes low force chiropractic techniques, with his favorite avenue of treatment being the Zindler Technique. This technique is a unique functional method utilizing muscle testing to offer a more complete neuro-musculoskeletal treatment. This treatment is effective working with the spine and extremities.

Dr. Wheeler and also focuses on correcting the posture of the patient, emphasizing proper foot mechanics and alignment.

“I like the expression, if you do something you love, you’ll never work a day in your life. I feel like that’s been my experience with being a chiropractor,” he added.

Susan Wheeler also boasts a lot of experience in healthcare.

Wheeler is a retired physical therapist, doing a lot of work with hip and knee replacements. She also enjoyed working to rehabilitate stroke patients and those who suffered head injuries.

The Wheeler’s  have three adult children and two grandchildren.

Their daughters Megan and Alexa live in Boise, Idaho and their son is enlisted in the Air Force and is currently based in Los Angeles, Calif.

When not at the clinic, Greg enjoys spending time on the tractor outside and working on their acreage. He also has a passion for music, playing in a band in college but now plays the bass guitar for church on Sundays.

In her spare time, Susan enjoys anything to do with fitness. She also is learning and developing traditional skills like making soap, butter, canning, etc.

The building that now houses Hay Springs Chiropractic at 109 N. Main, has a deep history to Hay Springs.

The building is estimated to have been built around 1900. Horn & Morgan Insurance Co. was the first business to occupy it and they specialized in real estate insurance. They spent over 50 years in the location, playing an integral role in the development of Hay Springs.

In the late 1950’s, D.O. “Bud” Morgan purchased the building and opened his insurance company. Morgan held on for a number of years and a few more businesses would occupy until Bud’s son, Bruce, would open Larson Insurance in the mid-1980’s. Bruce Larson operated his insurance business until his passing in 2008.

Following the passing of Larson, the building has hosted a wide array of businesses on a rental basis up until Hay Springs Chiropractic has moved in.

Hay Springs Chiropractic is located at 109 N. Main Street in Hay Springs, Neb. They are currently open on Tuesdays and Thursdays, from 12:00 p.m. - 5:00 p.m. with plans to possibly expand hours in the future.

More in this category: « Local State Farm agent set for retirement after 42 years in Gordon