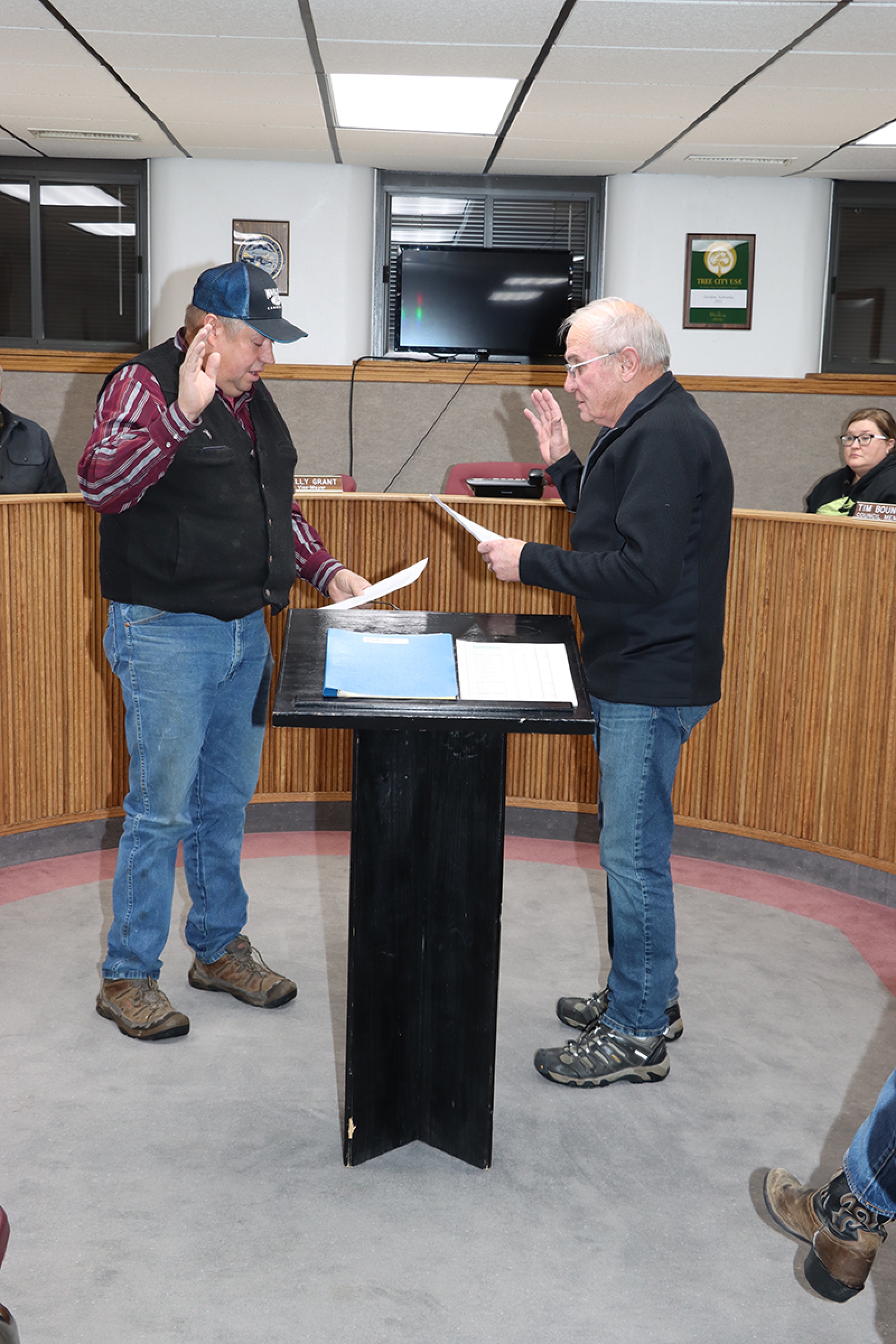 The Gordon City Council met for the regular monthly meeting on Thursday, December 8. The meeting began at 6:00 p.m.

Kelly Grant, Tim Bounous, Alyssa DeHart, Dennis Child, and Tom Evans were all present for the meeting. No one was absent.

City Attorney Jamian Simmons was scheduled to call in at 6:00 p.m. but due to some technical difficulties, she was delayed.

The Council then moved on to the swearing in Council members for their terms that were elected in the November General Election.

Outgoing Mayor Nancy Russell’s spot on the Council was open following her retirement and in the recent election, a new member was selected. That new Council member is Dennis Child.

Child was sworn in as a new member of the Council for his first term.

Incumbent members Tom Evans and Tim Bounous, who were once again elected to the Council, also were sworn in for the next term.

The minutes from the from the regular meeting that took place on November 10 were approved by the Council.

They followed that up with the approval of both the October and November Treasurer’s Report.

City Manager Glen Spaugh spoke to the Council about items that are located on both Treasurer Reports.

The Council did not ask any questions of Spaugh and approved the reports.

Jamian Simmons then was able to connect to the meeting via telephone to discuss with the Council the Mayoral Selection Process.

Simmons detailed that several months ago, it was discovered that the City of Gordon had not been choosing it’s Mayor in line with the Nebraska State Statute.

She continued that the position is an elected office and it should be on the ballot and then elected.

This Mayoral position needs to be separate from the Council so there would be 5 Council members and a Mayor.

In order to rectify the issue, Simmons said they have two options.

If they decide to not select that applicant, they would once again accept applications. Another special session would then be held and all candidates would be presented by the Vice-Mayor. The Council would have to make a final decision during that second session.

Option #2 for the Council is a Special Election.

Simmons stated that they could hold an election to select a Mayor. She added that the City of Gordon would be responsible for the costs of the election and that it would take significantly more time to complete.

She added that the Council should select a Vice-Mayor (President) tonight and that individual would fulfill the Mayoral position until it can be filled.

After some discussion, the Council decided to move forward with Option #1.

They will accept applications for the Mayoral position and then host a special meeting at 5:30 p.m. on Thursday, January 5. At that  meeting, they will vote on a candidate that is selected by the Vice-Mayor.

The Council thanked Simmons for her time and assistance on this matter.

One more detail had to be finished up in regards to this process; the election of a Vice-Mayor/President of the Council.

The Council then moved on to the Bills and approved those without much discussion.

Resolution 2022-15 was next on the agenda. This Resolution is adding the rates for basic life support to the levels of service provided by the Gordon Volunteer Rescue Squad.

It was noted by Spaugh that the purpose of this item is a correction in the verbiage. The Council approved the updates.

Another Resolution, this one titled 2022-16, was approved. This Resolution established a policy for the payment of payroll and associated expenses on a bi-weekly payment term.

Verbiage that was written by City Attorney Simmons for the City of Hay Springs to help resolve this issue.

It was noted in the meeting that the Council is probably going to have to meet twice a month to ensure that all bills are paid.

The Council reviewed this information but did not take any action on this item at the time. It was noted there would be a Resolution to be voted on during the January meeting.

The Maintenance Agreement with the Nebraska Department of Transportation was reviewed and approved by the Council next.

The Board Member Appointments for the 2023 year were then selected and reviewed.

The Council approved those Board Member Appointments.

On the agenda next, members of the Gordon Tree Board were present to showcase some recent Champion Tree Awards.

Jerald Hardin, who is a Certified Arborist, presented the trees which have received the distinction.

Hardin went over a variety of trees in the Gordon community that were measured and received recognition.

Hardin emphasized that the trees are the award winners, not the owners.

He concluded his presentation by urging the public to nominate more trees next year to see what they can come up with. Hardin noted that this coming spring, a nomination form will be placed in the newspaper and is free for everyone to fill out and turn in.

Gordon citizen Marlys Slater then spoke on the next agenda item. Slater wanted to speak to the Council on Tree, Grass, Vehicle, and Snow Ordinances.

She feels that City Ordinances are superseded by Nebraska State law and should be null and void.

Slater would like the City to create an organization like C.A.R.E. to help citizens deal with the expense of removing dead trees.

She would like the Council to grab their own equipment and help mow, trim hedges, etc. and she feels they should encourage others as well to help others out.

Slater brought in items from the grocery store to help visualize how inflation is affecting citizens.

Michael Varn was on the agenda but was unable to attend the meeting.

Anne Liebermann was next on the agenda to speak with the Council on a Dog Park.

Liebermann feels that the benefits of having a Dog Park would be numerous for the community. She notes that there are very few fenced in yards in town and almost everyone has dogs but Gordon has no where for these dogs to run around and play.

A dog park would help dogs around town learn to how act around other dogs and provide a tourist attraction for travelers, especially those who needs a place to let their dog(s) play.

Some locations mentioned by Liebermann included Wayland Park near the swimming pool and the old mobile home court.

She looked at both locations and feels those could be a good fit.

The next item on the agenda was details on the upcoming minimum wage increase in 2023.

Vice-Mayor DeHart stated that an Initiative that was passed in the recent General Election is the driving force behind these changes.

Spaugh went over a variety of options on how the City can move forward with these mandated changes.

The Council then asked Spaugh if they could wait to make any decisions on a gradual change in the payroll. Spaugh said that would be fine to wait until after the first of the year.

The City of Gordon’s Employee Christmas Party is scheduled for December 22.

The office will need to close at 2:00 p.m. to have that party. The Council approved that request.

It was noted that the City does not pay for any of the materials for the party.

DeHart then read the reports on the Police and Rescue Squad  departments for the month of November.

The siren project has begun with the hardware installation. JayBird Electric is working on it and NPPD will also be installing a pole for the project.

This project was slated to be done in June of this year but due to delays with the originally contracted company it has taken a bit longer.

The meeting was opened for Public Comments.

He wonders if the community of Gordon is producing too much trash.

With no further business, the meeting was adjourned at 8:04 p.m.