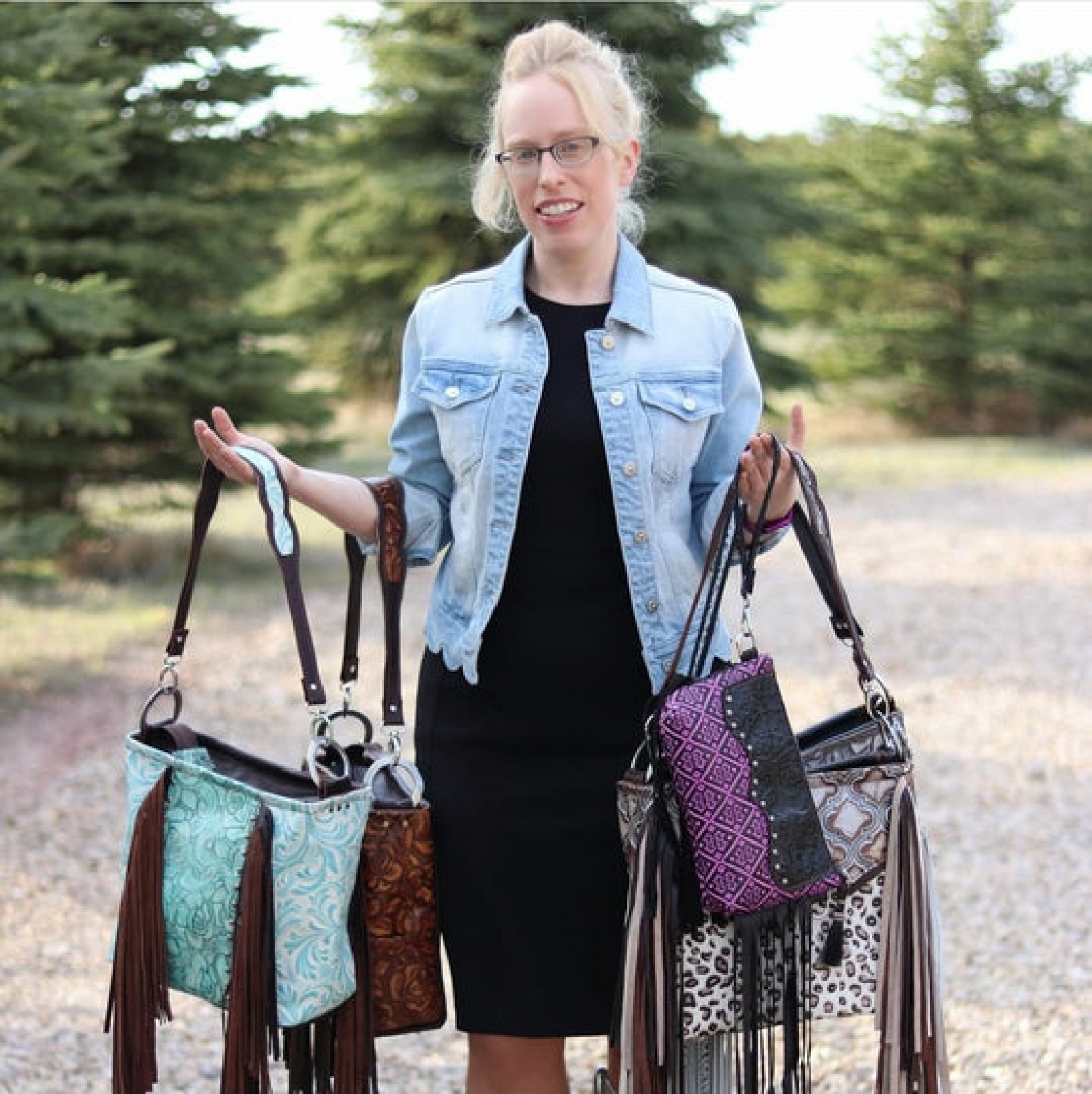 For a family with a long history of working cattle in the Sandhills near Gordon, Neb. the day-to-day operations might seem normal on the surface.

Tending to cattle, fixing the fence, and long nights during calving season are all norms for most ranchers in our area.

But something special was happening behind the scenes at the Swayne ranch north of Gordon.

Lacey Swayne, through some persistent convincing from her mother Polly, reluctantly began to sew when she was 8 years old.

Lacey will freely admit, it was not her first choice, but she learned anyways.

“As a kid of 8 years old, I hated having to learn how to sew. I would always try to escape when Mom tried to make me sew something,” said Lacey Swayne.

“I laugh now because I sew leather every day and Mom and I fought hard over whether I would learn how or not,” she added.

Lacey’s mother, the late Polly Swayne, had a profound impact on the path that she has taken.

Jacobs and the Swayne family  ran cattle together for years and Lacey developed a friendship with Hot Shot.

One of Jacobs’ many talents was leatherwork and that is where the love for leatherwork began.

“He was a very artistic leatherworker. He made rodeo chaps, belts, headstalls, dog collars - all by hand at his kitchen table,” said Swayne.

“I loved Hot Shot and I wanted to grow up to be just like him,” she added.

With the inspiration from her ranching friend, along with the support of her family, Swayne’s love and talent grew over the years when it came to sewing and leather work.

When Lacey graduated from Chadron State College in 2008, she used some gift money from her grandparents to purchase some leather tools and leather.

Her first project; spur straps with a flower on them. She had to show her old friend the completed project.

“I thought they were pretty good for a first try so I showed them to Hot Shot. He looked them over and said keep practicing,” said Swayne.

And having that hard-working character of growing up as a ranching family in the Sandhills came in handy because that’s exactly what Lacey did - she got to practicing.

Lacey and Polly decided to take their first shot at making a purse, the item that was always at the top of their list.

The duo handstitched the purse, which had an inlaid star on the front of it, and it took many hours before it was done. It was the first purse of so many more to come.

Lacey would also become very proficient in beadwork, honing her skills during those late night calving checks, but found she needed an outlet for her creations.

A business would be born from this and she went back to her old friend for inspiration for the name.

“I thought about Hot Shot, he never called me by my full name, he shortened it to Lace,” said Swayne.

“Hot Shot’s sense of humor was to say the opposite of how things were and it was funny. He would say, “Aww look over there at Lace, she is so wild,” except I was not wild at all. So I put the two together, Wild Lace. I love to bead so beadwork will always be a part of my business. Wild Lace Beadwork was born.”

Sales took off for Swayne and her mother, whom she hired full time in 2019 to help with production.

Some changes needed to be made around her house as well to meet production needs.

Swayne remodeled her 1,500 square foot basement to accommodate the business. This includes a show room with large pictures from photo shoots and all the purse inventory from her website on display racks.

She has rooms for embossed leather (over 250 kinds) and plain leather, along with multiple sewing machines.

She even has a photo studio set up for when she goes Live on Facebook to show off her creations.

But like any good story, things have not always come easy for Lacey.

In April of 2022, her mother Polly Swayne, passed away from cancer.

The loss had not only a profound impact on the community and her family, but also on her business - - it halted it’s operations.

“I am a creative person. I dream in color and texture. Everything I see is an inspiration to make a purse,” said Swayne.

“It left me when my Mom died.”

Polly’s sewing machine was quiet and there were 30 purses that she had made right leading up to her death. Lacey did not want to sell these items and have them to go strangers, so she instead looked back for inspiration from an old friend.

“I thought about the traditions of Hot Shot and how after a death, his family always gave gifts to people that were friends of the person who had died, family members, people who had been kind. So I laid out all of the purses and then my Dad and I gave them all away to neighbors, friends, people who had been kind, people who meant a lot to us. I wished then that we had more purses so we could give everyone one,” said Swayne.

It took some time for Lacey to recover from the loss of her mother and she stopped producing purses for a while.

Slowly her confidence returned and she decided to stage a comeback on October 1, 2022.

“I decided to make one purse a day and see what happens,” said Swayne.

She did just that and her momentum began to build again.

Christmas of 2022 was coming up quickly so Swayne began making two purses each day to try to meet demands.

After the dust settled from the holiday, Swayne had the best Christmas season to date in sales.

She has revamped her factory and set up stations for each part of the purse making process. She has also began beading again after Christmas and reopened her custom purse website.

The purses have gone to every state in the United States as well as Germany, United Kingdom, Canada, Mexico, and the Netherlands.

In memory of her mom, Polly, Lacey donates a purse each year to the CARE organization for a fundraiser.

In a true family affair, Lacey states that her dad, Kenny, handles all the packaging orders and is learning how to sew.

Things are back on track for Lacey Swayne and Wild Lace Beadwork but in true Sandhills fashion, she is not satisfied and continues to push the envelope to take the business even higher.

You can view Lacey’s work and purchase one of her handmade purses at Wild Lace Beadwork’s website: https://www.wildlacebeadwork.com