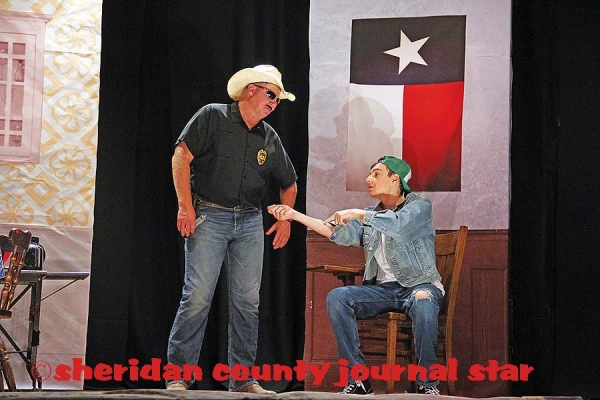 To order prints, give us a call at 308-282-0118 or email This email address is being protected from spambots. You need JavaScript enabled to view it. 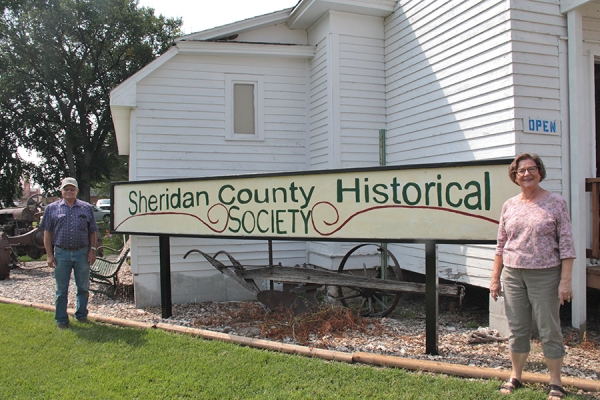 After years of clutter and outdated building features, the Armstrong House Museum in Rushville, Neb. got a new start thanks to Jerry Wellnitz and Phyllis Krotz. Wellnitz and Krotz were rewarded for their hard work and preserving Sheridan County’s heritage in the museum by being chosen as the 2017 Rushville Fun Days Parade Grand Marshals.

Phyllis Krotz has lived in Sheridan County nearly all of her life. She began working at the museum as a museum volunteer, whose main job, it seemed, was to fix and redo labels. Then, her fascination with the history of Sheridan County escalated when she noticed a woman named Margret Asey. She learned all about Margret’s life, and that hooked her on history and research. After doing many hours of research through newspaper clippings, books, and journals, she has learned about the lives of many of Sheridan County’s residents from the past. This process of finding and reliving the lives of the people who lived in Sheridan County and surrounding areas continues to be one of Phyllis’s favorite things to do at the museum. She also files articles and organizes museum artifacts. During the winter months, she researches and looks through biographies to make sure that they are correctly organized, labeled, and the facts are accurate.

Jerry Wellnitz, a father of two and grandfather of six, has been a Sheridan County resident all of his life. A few years ago, he was asked to help with some renovations to the museum building. This began his volunteer work at the museum, which he has come to enjoy more than he thought he would. One of his first projects was to fix the leaky bathroom. While doing so, he removed panneling around the bathtub. The plan was to rip out the bathtub as it was not needed anymore. Once the panneling was removed, he and Phyllis discovered an antique claw-foot bathtub, that they fixed up and left in the bathroom as part of the museum. Not much maintenance had been done before Jerry arrived. Since then, he has built light-up display cases, replaced lights, fixed ceilings, rebuilt a windmill with the help of his family, fixed up the outbuilings, and covered the bell that sits on top of the museum to protect it from direct sunlight.

Family plays a major role in the museum’s upkeeping and in Jerry and Phyllis’s lives. Children, grandchildren, cousins, siblings, and many others enjoy volunteering their time with Jerry and Phyllis to help keep the museum looking its best.

Both are looking forward to Fun Days and representing the museum as the Grand Marshals. Phyllis said, “I was really surpised about being asked, and I must say that I was really pleased that people noticed the museum. That is what makes me happy.”

Jerry and Phyllis also enjoy visiting with the people who come to browse at the museum. Both like to share Sheridan County’s heritage by providing fun stories that corrolate with various pieces of museum artifacts, answering questions, and giving a warm welcome to visitors. They have noticed that many people from out-of-state like to stop and take in information about Sheridan County and the Native American culture. People from as far as Switzerland have stopped in to check out what the Armstrong House Museum has to offer.  “That’s another thing about the people,” said Phyllis. “They almost always have a good story to tell you.”

It isn’t hard to tell that the museum has become a big part in Phyllis and Jerry’s lives. That makes the work they do that much more enjoyable, and the community of Rushville and other surrounding areas appreciate all of their hard work and dedication.

“The museum, it just kind of hooks you,” said Jerry. “It sure did hook me. You notice one thing, and then you will find something that connects to it a few days later. You see something new everyday that you haven’t noticed before, and you are shocked at how much you really didn’t know.”

Armstrong House Museum hours are from 9 a.m. to 4 p.m. Monday-Friday between Memorial Day and Labor Day. It is also open by appointment. For an appointment, email Jerry Wellnitz at This email address is being protected from spambots. You need JavaScript enabled to view it. or give him a call at (308) 327-2917. 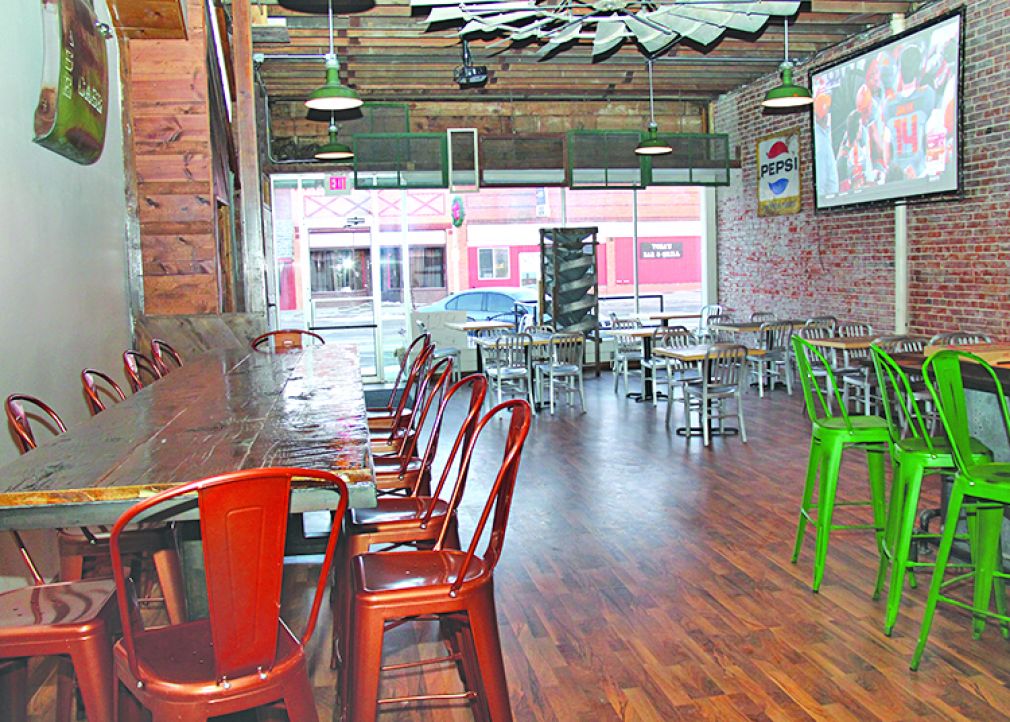 Owners Courtney and Tosha Fuller enjoyed helping their customers and making pizzas and salads after all the hard work. The Fuller’s have discussed expanding their menu as they go, but as they launch the business they will stick to the basics.

They officially owned the building a year ago in August and worked to create a welcoming environment for the public. “It was a process,” said Tosha. “It was just something we talked about when we wanted to open the bar.”

Originally, the south wall had scaffolding and seats, which they removed. They used copper counters to accent the brick oven and installed large windmills as ceiling fans. Courtney laid the brick oven over several weekends at the back of the restaurant, which gives the pizza a smoky flavor.

The Twisted Turtle has seating for about fifty people, but Fuller said they haven’t received the occupancy number yet. As the opening day approached, Fuller made a pizza for lunch. After removing it from the oven, she noticed the crust was burnt on the back. She was never taught how to make pizzas and said she has messed up a few times. Through trial and error, she figured out how to rotate multiple pizzas through the oven and getting the wood hot to make a golden crust.

Fuller made her first pizza for the Funk family. The Funk’s were there for the opening and celebrated with a large pizza.

Pizza was popular on Friday night as it left a limited stock for Saturday. Fuller made about 20 pizzas by 4:30 p.m. Friday evening. By 7 p.m. on Saturday, the Twisted Turtle Pub had used all the cheese.

The Fuller’s are currently working to get their liquor license. “Beer always goes good with pizza,” said Fuller. They reapplied for the license at the last Rushville City Council meeting since it took awhile for the restaurant to open.