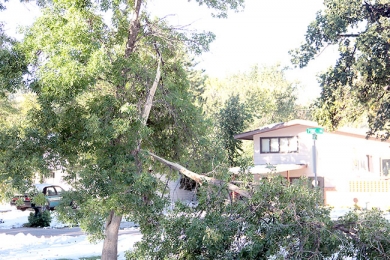 LINCOLN, Neb. (AP) _ Residents in northwest Nebraska worked Tuesday to clean up fallen trees and dead cattle left in the wake of a massive snowstorm, while state officials implored them to keep detailed records so they might qualify for government assistance.

Lt. Gov. Lavon Heidemann and a state emergency team met with local officials in Chadron, Crawford and Harrison. Heidemann, a longtime farmer, said he was surprised by the number of the livestock deaths, which was expected to rise into the thousands.

“It was worse than I thought,’’ Heidemann said in an interview. The storm “just took tree after tree after tree. What I wasn’t prepared for was the loss of livestock. They showed me pictures of animal after animal _ piles of them _ that they’re going to have to deal with. There’s snow still out there, and as it melts, I’m sure they’re going to be finding even more.’’

Heidemann, who oversees Nebraska’s emergency services, stressed the importance of keeping detailed receipts of storm cleanup expenses. The state offers partial reimbursement to communities once their expenses rise beyond a certain point, but Heidemann said it isn’t clear whether the area will qualify for federal aid. State officials can’t get their questions answered because of the federal government’s partial shutdown, he said.

At least 90 percent of the properties in Chadron saw some type of damage, mostly to trees that collapsed under wet, heavy snow and wind, said city manager Wayne Anderson.

The wind-whipped storm was part of a massive front that dumped up to several feet of snow on the western Plains, and caused tornadoes in eastern Nebraska, South Dakota and Iowa. Officials in Nebraska said there was heavy tree damage along the Highway 20 corridor between Rushville and Harrison. Chadron and Crawford were especially hard-hit, and officials say Chadron received 10 inches of snow. In northeast Nebraska, tornadoes caused millions in damage to a business district in Wayne and injured 15.

The severity of the snowstorm, unusual for early October, caught many ranchers in the Nebraska Panhandle off guard. They reported widespread losses of cattle that froze or suffocated in massive snow drifts while out on summer ranges.

“There are thousands dead _ thousands,’’ said Jack Hunter, owner of the Crawford Livestock Market. “There are 2,000 to 3,000 in our area that I know of. I’m 62 years old, I’ve been here my whole life, and I’ve never seen anything like it.’’

The Nebraska Department of Agriculture was encouraging ranchers to keep detailed records of any losses and have them verified by a third party, such as a veterinarian or county extension agent, in case they become eligible for federal assistance. They were also advised to take photographs and hold onto receipts for carcass-removal services. Two cattle operations had contacted the department as of Tuesday afternoon to report losses of more than 100 head, said spokeswoman Christin Kamm.

Chadron saw widespread damage to power lines and poles in the city of 5,900, and more isolated cases of trees that fell onto homes and vehicles, he said. Wind gusts reached between 50 and 60 mph during the weekend storm, according to the National Weather Service in Cheyenne, Wyo. As of Tuesday afternoon, Anderson, the city manager, said residents had hauled more than 900 truckloads of debris to its dump site.

Despite the damage, Anderson said residents had made progress with the help of volunteers. Two local churches canceled their Sunday services to help, and a local Walmart store sent 15 of its associates into the streets with chain saws to help clear fallen branches. City officials took to the radio and social media, asking residents to drape towels over their front door to signal that they need help clearing debris.

“There’s been a tremendous surge in volunteerism,’’ Anderson said. “In a frontier community like we are, something like this tends to bring people together.’’

In Crawford, vehicles filled with storm debris have been forming lines a half-mile long outside the local dump. The city saw between 12 to 14 inches of snow, but the winds “just tore the heck out of our trees,’’ said Mayor Terry Haugen.

“We’re going to be working at this for a week or so,’’ Haugen said. “I’ve got the dump open seven days a week, and I can’t even give you a count of how many people are hauling stuff right now.’’