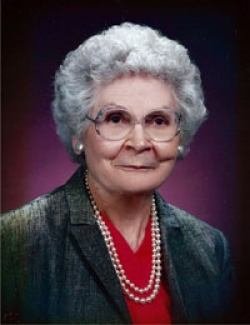 She was raised on the family farm near Clinton, Nebraska, and attended school in Clinton.  She graduated from High School in 1939.  She married Milton Charles Burleigh on March 21, 1941, and to this union two daughters were born, Carole Jean Coon, Rapid City, SD; and Marlene Sue (Brad) Pisha, of Tuthill, SD.

She loved to sew and garden; she also raised beautiful African violets.  Her cooking was enjoyed by friends, and especially by her family. Many students of Gordon High School appreciated her cooking while she was employed there for 15 years. Traveling also highlighted her life: she and Milton enjoyed trips to Europe, New England states, Hawaii, Canada and other trips in the states. Virginia was a talented self-taught pianist, as she played for her own enjoyment and also for the Clinton United Methodist Church, for which she was a member for most of her life.  She was an active member of the  Clinton United Methodist Women for 75 years ; she so enjoyed being involved with the Annual Lord’s Acre  Dinner, Bazaar, and  Auction.

She enjoyed a lively game of cards, whether it be pinochle or cribbage. She was a Husker fan and listened to the games or watched them on television when she could.  She also listened on the radio to the local high school games.

She was preceded in death by her parents, Carlotta and Ernest Mathis, her brothers, Harold and Robert, and her husband, Milton.

Funeral services will be held Friday, October 11, 2013, 1:00 PM at the United Methodist Church in Clinton, NE, with Pastor Abigail Eltzroth officiating.  Burial will be at Fairview Cemetery, Rushville, NE.

Memorials to the Clinton United Methodist Church may be sent to the Chamberlain-Pier Funeral Home, PO Box 366, Gordon, NE 69343.