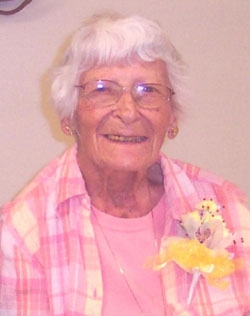 Dorothy married Vern Wesley Goodin on February 5, 1939 at O’Neill, Nebraska. He died December 21, 1995. After their marriage they lived in many communities. They lived in Gordon, Nebraska from 1947 until 1969 when they moved to Gillette, Wyoming. In May of 1971 they moved to Greeley and remained here.

Dorothy was a very artistic and creative person. She was an avid reader, a very good cook and baker and enjoyed canning. She was a hard worker. She was a lifetime member of American Legion Auxiliary Post Chapter 34 Fred Sturdevant in Gordon, Nebraska.