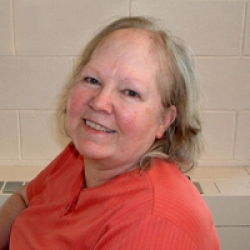 Diane was born on October 27, 1947 in Bucyrus, Ohio to Clarence and Gertrude (Nedolast) Kimmel. She grew up in New Washington, Ohio, with her parents and 13 siblings, graduating from high school there.

She married Charles “Chuck” R. Cover on Nov. 6, 1965, and remained in Ohio for a few years. Their two sons, Brad and Brett, were born there. Wishing to experience other parts of the country, they spent time in Nebraska and Montana before returning to Ohio where their daughter, Azure, was born.

In 1977 the family moved to Hay Springs, where Diane kept busy with Cub Scouts and the Altar Society at St. Columbkille Catholic Church and taking care of her children and grandchildren, cooking and becoming everyone’s favorite pie baker. She began working at the Hawk’s Roost restaurant in 1985 and eventually ran the business herself from 1987-91.

In 1991 the time seemed right to move on, and she spent several years cooking at the Hay Springs school system followed by five years as a cook at Pioneer Manor until she began to have health problems and decided to retire.

Diane was a kind, sweet and good lady who cherished her husband and family and her church.

She was preceded in death by:  her husband, Chuck; her parents; three sisters, Mary Ann Hosey, Anna Niedermier, Patricia Kimmel; and one brother, Daniel Kimmel.