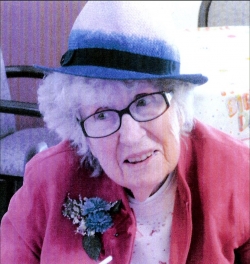 Cora May Aspinall was born , to Francis Richard and Allie Gertrude Simms in .  In 1930 they moved to  and then to .

Cora passed away , at Pioneer Manor Nursing Home in .

Cora and Harold lived on the same farm for twenty years, and then Cora moved twenty times during her life.  In 1970 Cora and Harold moved to , where they owned a motel and gas station, before semi-retiring.   In 1983 they moved to , and then later lived in , Mitchell and .  After Harold passed away in 1994, Cora lived in , ,  and . Cora resided at Parkview Lodge Assisted Living in  for two years.  Then, following a stroke, she moved to Pioneer Manor Nursing Home in , and lived there for the remainder of her life.  Cora loved “styling”, wearing her collection of hats and surprising the other residents and staff with her unique taste in fashion.

Cora was a small woman with a big sparkling personality, joking and laughing to her last day.  She wrote her autobiography and enjoyed sharing her story with others.  Cora always had creative projects in progress and sewed, painted, and did handiwork-especially quilting.  Her children and grandchildren treasure the quilts she made, along with dolls and doll clothes and many other items she designed.

Cora’s focus was her family and every house she occupied became a warm welcoming home with cookies in the cookie jar and coffee in the coffeepot.  Her homes reflected her love of family and tradition, filled with photos, memorabilia and prized pieces of furniture she had collected over the years.

Cora was a 4-H leader for many years, a member of the Presbyterian Church, and later of the .  She belonged to Eastern Star and Daughters of the American Revolution in earlier years.

Cora’s work ethic endured throughout the years on the farm: gardening, canning produce, raising chickens and turkeys to sale and sewing clothing for her girls.  She was a foster parent for babies for Social Services, and managed the motel in and never stopped working, creating, contributing and helping others.  This work ethic was evident in her recovery from her stroke earlier this year, as she strived to strengthen her unwilling arms and legs and to become more independent.

Cora is survived by her sisters Gertrude Hartman of ; Nellie Hamilton of Battle Lake, Minnesota; and Laura Robertson of .  She is also survived by her children:  Roxann Arnold and Frances Peters (Bob) of; Janice Russell (George) of ; and her son Bert Harold of .  Grandchildren include Angie Arnold (Jack) of Minneapolis, Minnesota; Anthony Arnold (Mia) of Sydney, Australia; Jeff Welshans (Nicole), Jason Russell (Stacy) and Elizabeth Fitzmaurice (Greg) all of Mulvane, Kansas; A.J. Aspinall of Brookings, South Dakota; and Austin Aspinall (Amber) of Coos Bay, Oregon.  Cora was the proud “G.G.” to her great-grandchildren and a favorite aunt of many nieces and nephews.

Funeral services were held ,  at ,  with Reverend Fred Andersen officiating.  Burial was held in the , .

A memorial has been established for the , Parkview Lodge Assisted Living or the Pioneer Manor Nursing Home and donations may be sent in care of Chamberlain-Pier Funeral Home PO Box 366 Gordon, NE 69343.