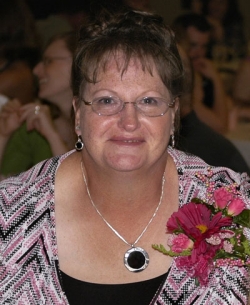 Irene F. McKillip, 57, of Hay Springs, went to be with her Lord on Monday, November 11th, in her home.

Irene was born in Alliance, Nebraska on May 24th, 1956 to Merle and Florence Longacre. She was one of 7 children. Irene met the love of her life, Dennis McKillip, right before she graduated high school and married him on June 30, 1976. She earned a certificate at Auctioneering School in Fort Smith, AR. Irene spent several years of her young married life living in the Sandhills of Nebraska where she was a stay-at-home mom to Ira, Amy and Levi.

After living in the Sandhills for several years, the family moved to Silver Springs, NV where they lived for 10 years and she worked as an auctioneer alongside Dennis.

In 1993, the family returned to Nebraska and settled in Mirage Flats, 15 miles south of Hay Springs. Irene was a bus driver for District 30 country school, Hay Springs High School and also worked at Head Start.

Irene was a fast friend to anyone she met, cared deeply for the needs of others, and had a servants heart. There was not a baby that Irene could not cuddle and put to sleep. Irene was full of life, love and laughter. She was a devoted wife, mother, sister and friend. She could turn any boring story into a funny and exciting one. She loved to cook, clean, ride with her husband, Dennis on motorcycles, and share her faith in Jesus.

A memorial has been established. Donations may be sent to Chamberlain Chapel, PO Box 970, Chadron, NE 69337