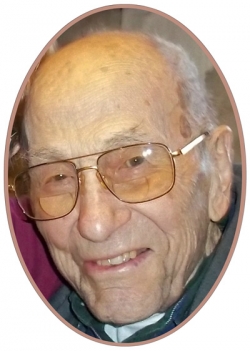 Ben Schrader was a gracious and decent man. He passed away peacefully at his home on November 14th, 2013 at the age of 97.

Ben was born on September 29th, 1916 in Gordon, NE to Frank and Eliza Schrader. He spent his early years in Gordon until shortly after the passing of his Father when he and his Mother moved to Santa Ana, CA to be near extended family. After completing the 9th grade there, he convinced his mother to move back to NE so he could live out his dream of being a cowboy which he did for several years. During this time he met his first wife and of this union, son Lewis was born. His love of being a cowboy was interrupted by World War II during which he served in many theatres of the South Pacific before being honorably discharged after receiving the Purple Heart and several other medals. He made his way back to Gordon where he started driving truck for the refinery; hauling crude oil from the WY oil fields. Ben’s final profession until his retirement was working for the Gordon School District as a janitor for over 20 years.

During his time as a truck driver after the war and on one of the many runs hauling crude, he stopped at a little diner in Chadron, NE where he met the love of his life, Dolores Edwards. He stole her heart with a silver dollar and from this lifelong love, two children were born. Ben and Dee were married for 62 years until her passing in 2008.

More than anything, Ben dearly loved and enjoyed the company of his family and friends. He often mentioned that he didn’t have the largest family but he was ever so lucky and fortunate to have the one that he had. He was a skilled and avid wood worker. Family and friends will forever treasure special pieces – beautiful cabinets, tables, quilt racks and frames that were created by Ben’s loving hands. Though he hadn’t been able to go for a few years Ben loved fishing. In addition to good stories to share, this was a chance to spend time in his beloved Sandhills. Though he could no longer be a cowboy, Ben dearly enjoyed the rodeo and country music. He loved to share both with everyone he touched. Up until his last days, Ben loved a good game of Cribbage or Backgammon – cards and a board was always close at hand. If luck was on your side, you might just be able to beat him once in a while. Ben loved a good practical joke and had a good sense of humor to the very end.

Ben was a member of St. Leo’s Catholic Church and the Knights of Columbus in Gordon for over 50 years.

Ben was preceded in death by his wife Dolores; son Lewis; parents Frank and Eliza; siblings Edna, Burt and Grace.

The family has established a memorial in Ben’s name at the Gordon chapter of the American Legion, Post 34, and donations may be sent in care of Chamberlain-Pier Funeral Home, PO Box 366 Gordon, NE 69343.