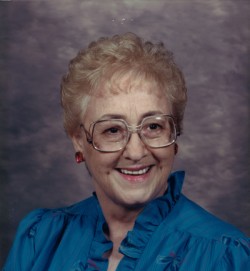 Ione was born August 31, 1923, in Winner to William and Bertha (Hinken) Palmer. As a young girl she lived in Winner where her father operated a meat market. In 1927, her family moved to Martin and her father went to work as a butcher for R.D. Cook Mercantile. Before long he opened a grocery store and meat market of his own on main street. He also bought Hampton’s garage and sold Plymouth and DeSoto cars.

Ione attended Martin grade school and Bennett County High School. Ione had four special friends throughout her high school years and they called themselves “the Terrific Five”. After graduation in 1942, Ione worked as a waitress in the coffee shop east of the hotel to try to earn some money before going to college. She went to college at Chadron for one year.

On March 10, 1943, Ione married Harold Bates in El Paso, Texas. No sooner than the couple settled in El Paso, Harold was shipped overseas to help win World War II. Ione then returned to Martin and worked in various offices in the court house, eventually becoming head of the Ration Office during the war.

When Harold returned in 1945, they lived in Merriman for two years where the first of their four daughters was born. Other moves took them to Tuthill, and then back to Martin in 1949 where they bought the grocery store Ione’s parents had operated.  Ione enjoyed being an owner and operator of the store and greeting all of her customers. Her smiling face and kind words are remembered by many as part of their shopping experience. After 44 years, Ione and Harold sold the store and retired in 1993.

Ione was a talented artist and utilized oil, acrylic, watercolor and chalk mediums. Ione was a member of the Eastern Star and belonged to several card clubs and the Beta Sigma Phi sorority. She was active in St Katharine’s Episcopal Church where she taught Sunday school for many years. She loved fashion and color and had beautiful flower gardens. She perfected joke telling to a fine art. Onie will be remembered by many for her loving care and service to others throughout her life.

Ione is survived by her husband, Harold of Martin; her three children, Janet Bates of Martin; Patti Bates of Kaneohe Hawaii; and Nancee Bates and her family; husband Geo LeGeros of Lincoln Nebraska, their son Life (wife Melanie and their children, Zoe and Ayla) of Somerville, Massachusetts, and their daughter Nakula of Burlington, Vermont. Ione was preceded in death by her parents, her siblings Anna, Eva, Vernon, and Billy and her daughter, Georgia Ann.

Services will be 10 a.m. Monday, December 16, 2013 at St. Katharine’s Episcopal Church with the Reverend Craig West officiating. Burial will be at the Martin Community Cemetery.

The family suggests memorials to the Bennett County Senior Citizens Center and donations may be sent in care of Security First Bank, PO Box 669 Martin, SD 57551.

Bennett County Funeral Service was in charge of arrangements.