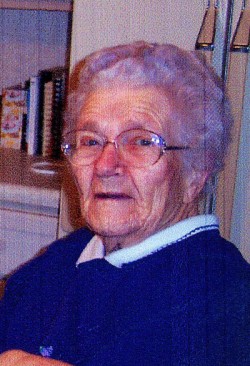 Memorial services for Wilma B. Hunter of Hay Springs, Nebraska will be held on Saturday, December 21, 2013 at 1:00 PM at the Zion Lutheran Church in Hay Springs with Pastor Peter Bertram officiating.  Inurnment will take place at a later date at the Gordon Cemetery.  Mrs. Hunter passed away on December 15, 2013 at the Pioneer Manor Nursing Home in Hay Springs.  She was 100.

As a child Wilma worked beside her father driving a team of horses behind a mower, helping with harvesting and assisting with daily chores.  She also helped her mother in raising chickens, lambs and honey bees.

Wilma attended Sand Ridge School 3 miles away from her home by riding a horse, driving a horse and buggy, or sliding on a bobsled with her sister through 8th grade.  She graduated from Hay Springs High School.

In the 30’s Wilma met and married William Perry and they worked for Herman Jungck for three years southeast of Hay Springs.  Then they farmed and ranched southeast of Gordon where their first son William was born.  Their second son Alvin was born in the 40’s after they moved south of Rushville where Wilma loved homemaking in her big 2 story house.  She didn’t have too long in that home since in 1950 they moved north of Gordon to care for Bill’s brother’s place.  In the springs of 1958, Wilma’s life changed once more when her husband Bill passed away.

In the fall of 1960, Wilma married Garnet Hunter and moved to his parent’s place north of Hay Springs on Beaver Wall. Wilma helped Garnet with farming and ranching.  Garnet had three older children so Wilma also became a Grandmother at this time.

In the 70’s, Garnet and Wilma moved into Hay Springs making the old Jacobs Motor Company building into a comfortable home.  They shared the love of gardening, fishing, playing cards, and visiting with family and friends.  Garnet passed away on the late 80’s and Wilma continued to live in their home.  In 2008, her son Bill and his wife Kay moved in with her to assist her as needed.

Wilma came to live at Pioneer Manor on June 4, 2012.  Wilma loved to tell the stories of her childhood growing up.

Wilma is preceded in death by her parents; sisters, Christina, Nona, and Alma as well as a brother Edmund.

A memorial has been established for the Pioneer Manor Nursing Home or the Zion Lutheran Church.  Donations may be sent to Chamberlain Drabbels Mortuary, PO Box 443, Hay Springs, NE  69347