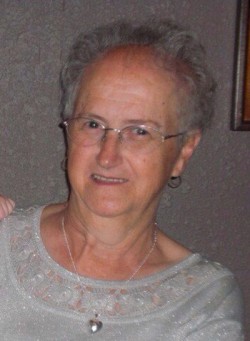 BeaAnne (Brandon) Taylor, 73, was welcomed into heaven Sunday December 15, 2013.  BeaAnne passed away unexpectedly at her home.   She was born in Hay Springs, NE. October 26, 1940 to Russell and Anita (Reid) Brandon.

BeaAnne grew up in Hay Springs, NE until 1951 when the family moved to Gordon where they bought an auto parts store. She attended Gordon schools until her junior year and then earned her GED.

On July 5, 1956 at the tender age of 15, BeaAnne was united into marriage with James Taylor. They celebrated 57 years together and as a result of this loving union, eight children, 24 grand-children and 14 great-grandchildren were born.

BeaAnne worked as a carhop at the Salad Bowl restaurant until her marriage.  BeaAnne was one of the first waitresses at the new Seger Oil Company later known as the Western Café.

In 1968 she started work at Gordon Memorial Hospital as a nurse’s aide and then became an OB tech where she helped deliver hundreds of babies.  She later become a ward clerk until she retired in March 2006. During that time she also owned a children’s clothing store “Just for Kids” from 1975 to 1981 while continuing to work the 3-11 shift at Gordon Memorial.

From 1958 to the time of her death, she nurtured and loved generations of children in the community through her home daycare.  BeaAnne exemplified the true meaning of love and family; she was a mother figure to so many of Gordon’s children. BeaAnne offered a home to those needing a place to stay or yearned to experience, if only for a night, a place of comfort and security. To the numerous friends of her children, she always made them feel like they were part of the family. A truly remarkable women who found joy in doing and giving to others. She will be remembered for her homemade goodies, her genuine beautiful caring heart, and the unconditional love for her family, her daycare children, her church, and community. BeaAnne has touched so many lives in so many different ways. BeaAnne leaves behind a legacy of love that has left an impact on Gordon and the surrounding communities. She will be sadly missed by all who knew her.

Holidays were very meaningful to BeaAnne, her home was decorated for every season imaginable.  Christmas, was of course, her favorite of all holidays, when nearly all of her 46 children and grandchildren would converge onto this small town to celebrate.

BeaAnne was an active member of St. Leo’s Catholic Church serving as a Eucharist Minister and served on the altar society as president and member. She loved going to craft fairs and was a Willow Tree volunteer, scouting vendors to travel to Gordon to sell their wares. She loved attending her grandchildren’s sporting events and worked hard on keeping Jim’s referring from the stands in check during these events.

Please join us in the celebration of her life with a Rosary Friday December 20th 2013 at 7pm and Catholic Funeral Mass Saturday December 21st 2013 at 11:00 am. Both services will be held at The Immaculate Conception Church in Rushville, Ne.

Thank you for loving our Mother!

More in this category: « Wilma B. Hunter James Burton McCollister »