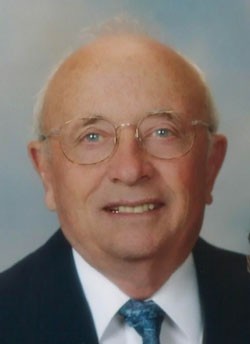 Mass of Christian Burial will be held on Friday, December 20, 2013 at 10:00 a.m. at Christ the King Catholic Church with Fr. Gerald Harr officiating. Military honors will be provided by the U.S. Naval Honor Guard. A vigil service will be Thursday at 6:30 p.m. at Gering Memorial Chapel. Inurnment will be Saturday, December 21 at 2:00 p.m. at the Gordon Cemetery, Gordon, Nebraska. Tributes of sympathy may be left at www.geringchapel.com.

Claire was born on January 9, 1925 in Howard, South Dakota to Mons and Bertha (Bergheim) Tystad. He moved from Howard, SD to western South Dakota at the age of 9. He joined the Navy in 1943, where he served on a mine sweeper in the Pacific during World II. He was honorably discharged in 1946, returning home to take over his father’s farm and ranch operation and used his GI Bill benefits to attend flight school. He then became the owner of a Super Cub airplane in which he spent many hours hunting coyotes, flying mercy flights after the blizzard of 1949. He married Eileen Coyne in 1953 and they raised 6 children on the ranch in Kyle, South Dakota. In 1988, Claire and Eileen moved to Gering when Eileen became Postmaster and he became a maintenance worker at the Scottsbluff National Monument. He was very proud of wearing their uniform and enjoyed visiting with the tourists.

He was preceded in death by his parents, infant son, and two brothers Milo and Robert Tystad.