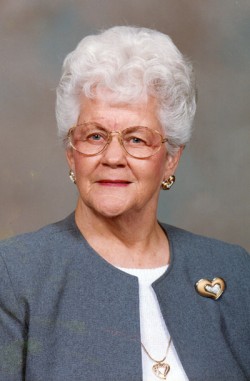 Services will be 1 p.m. Monday at All Faiths Funeral Home in Grand Island.  Reverend Mary Scott will officiate.  Burial of ashes will be at a later date in Hay Springs.

Survivors of the immediate family include daughter and son-in-law, Jo and Bill Clements of Aurora; son and daughter-in-law, Jerry and Peggy Hitchcock of North Platte; granddaughters, Kirsten Clements and Mendy (Brian) Dickey and great-grandchildren, Madelyn and Charlie Dickey and brother-in-law, Dorman Hitchcock of Alliance.

She is preceded in death by her husband, parents, sisters, Lola and Margie and brothers, Vernon, Darold and Leonard.

Jean was raised on a family farm near Hays Springs graduating from Hays Springs High School, class of 1944.  On May 2, 1945 she was united in marriage to Chester Hitchcock.  They lived in Hays Springs until 1953 when they moved to Gordon and later North Platte.  She worked at the title department for the Lincoln County Courts for many years.  She moved to Aurora in 2007.

Jean was of the Methodist faith.  She enjoyed crocheting and was active in the Prayer Scholl Ministries.

Memorials are suggested to the Memorial Healthcare Foundation.

Condolences may be sent to www.giallfaiths.com