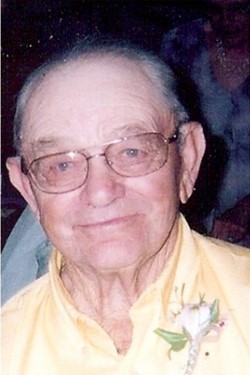 Burt was born February 3, 1915, in North Bend, Nebraska, to Otto and Christina Taylor.  When Burt was ten years old he and his parents and moved two miles north of Rushville.  He grew up working side by side with his father.

Burt was very active in 4-H, bringing grand champion hogs to the Dawes and Sheridan County Fairs.  In 1949 he received his pilot license.  Burt spent many hours in the sky.  He would go on trips to Canada to go fishing with his buddies, or just a trip around town.  Burt spent most of his life devoted to his farm.

He was preceded in death by his father Otto, mother Christina and wife Francis.

A memorial has been established for the United Methodist Church Women and donations may be sent in care of Chamberlain-Pier Funeral Home, PO Box 366 Gordon, NE 69343.