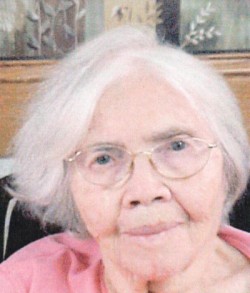 She married Robert James Harris in Chadron, NE on Jan. 29, 1941.  Marilyn worked at home as a homemaker as well as a farm hand and loving care giver to their many animals and eight children.

Marilyn enjoyed gardening, sewing, baking and caring for others.  She loved writing poems and sharing her faith with others.

Online condolences may be shared at www.carpentermemorial.com.  Those wishing to sign the memorial book may do so from 9:00 a.m. to 5:00 p.m. Thursday and Friday at the funeral home.  Memorial services will be 10:30 a.m. Saturday, Dec. 21, 2013 at Carpenter Memorial Chapel with Chaplain Robin Storer officiating.  Cremation was chosen.  Inurnment will be at Gordon, NE at a later date.  Carpenter Memorial Chapel is in charge of arrangements.