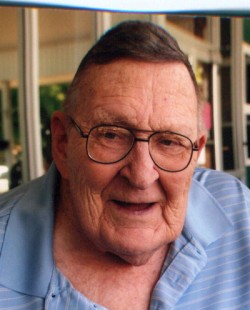 Erwin H. Holt, Jr. 87, of Kearney, died Tuesday, December 31, 2013 at the Mt. Carmel Home Keens Memorial. A Mass of Christian Burial will be held 9:00 A.M. Saturday, January 4, 2013 at the St. James Catholic Church with Rev. Joe Hannappel officiating. Interment will follow at the Kearney Cemetery with Military Rites provided by the Nebraska National Guard Honors Team in conjunction with the American Legion Post #52 and the VFW Post # 759. Visitation will be 4:00 to 7:00 P.M. Friday at the church with a vigil / prayer service beginning at 5:00 pm. Memorials are suggested to Mt. Carmel Home Keens Memorial. Condolences or personal reflections may be submitted at www.osrfh.com. Arrangements made by O’Brien Straatmann Redinger Funeral Home of Kearney. Erwin Herbert Holt, Jr. was born July 26, 1926 in Midwest, Wyoming to Erwin and Bernice (Beech) Holt. He grew up on a ranch near Hoover, SD. Erwin was a 1944 graduate of Belle Fourche High School in Belle Fourche, SD. He enlisted in the Army in September of 1944 where he served in the Philippines. He served until his honorable discharge in September of 1946. On August 18, 1949, Erwin was united in marriage to Dorothy Hannah. Erwin was called back into active duty in September of 1950, where he served in Alaska during the Korean Conflict, until August of 1952. The couple moved to Gordon, NE in 1960 where they owned and operated Gordon Cleaners. He was active in the Lyons Club, School Board, Jaycees, Chamber of Commerce and Knights of Columbus. Erwin retired from the National Guard in 1965. In 1975, they moved to Kearney where they owned and operated Modern Cleaners until his retirement in 1995. Survivors include his son, Stephen Holt of Kearney; daughters, Mary Meduna and husband, Jim of Omaha, Jennifer Schroeder and husband, John of Kearney, Deborah Holt of Omaha; grandsons, John R. Schroeder, Jared Schroeder and wife, Ashley, Joshua Schroeder and wife, Holly, Spencer Meduna, Evan Meduna; 3 great grandchildren, Michael, Mozzie and Traven Schroeder; step-sister, June Pluimer of Spearfish, SD; several nieces and nephews. Erwin was preceded in death by his parents; wife; step-brother, Wally; step-sister, Bonnie and step-mother, Fern.