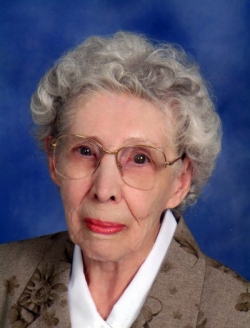 Ruth Fisher, 97, of Kimball, died at the Kimball County Manor on Saturday, January 25, 2014. Funeral services will be held at 10:00 a.m. on Wednesday, January 29, 2014 at St. Joseph’s Catholic Church in Kimball with Father Robert Karnish officiating. Burial will be held at St. Mary’s Catholic Cemetery in Hay Spring’s, Nebraska at 3:00 p.m. Friends may visit www.cantrellfh.com to view Ruth’s Tribute Wall and leave condolences for the family. Visitation will be held from 1:00 until 7:00 p.m. on Tuesday. Memorials may be given to St. Joseph’s Catholic Church or the Kimball Senior Center. The services for Ruth have entrusted to the Cantrell Funeral Home.

Ruth was born in Duff, Nebraska on October 10, 1916 to Frederick Charles Zlomke and Cecelia Blanche (Brewer) Zlomke. She was the oldest of six children. On July 5, 1928, Ruth was united in marriage to Harry Charles Fisher of Dunning, Nebraska. Harry and Ruth ranched for some time in the Brewster, NE and Merriman, NE areas. Harry suffered a heart attack in 1949 at which time they sold their cattle and moved to Halsey, NE where they bought a country store. In 1954 they moved to Hay Springs, NE. where Ruth began her teaching career in the Mirage Flats elementary school district. She eventually left the Mirage Flats elementary school district and taught in the Rushville, NE. school district. Between teaching and caring for her family, Ruth drove back and forth to Chadron, NE. to attend Chadron State College to further her education. She also spent many summers going to summer school. In 1964 she graduated with a Bachelors and Masters Degree in Elementary education. After her husband passed away in 1961, Ruth continued teaching in Rushville until her children finished their education in Hay Springs. In 1965 she moved to Kimball, NE. and took a teaching position in the elementary school system. Ruth retired from the Kimball public school system after 30 years of teaching. Ruth was a small person but mighty in her view of the future. Besides attending to her home and flower garden, Ruth spent time quilting at the Senior Center in Kimball, took a nurses aid class and a class to learn how to play Bridge. She took great pride in her appearance and was never seen when she wasn’t dressed up in a dress. No slacks or jeans for her! Before and after retirement she always found time to visit with her children and grandchildren by either flying or driving.