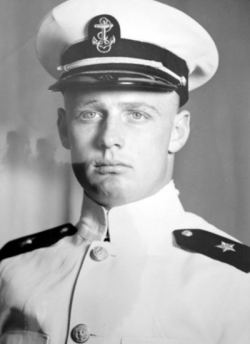 Richard Lee “Spike” Jones was born June 7, 1932 in the 30 mile canal ditch house south of Cozad, NE, to Lee Henry and Geraldine Elva (Metz) Jones. His first several years were spent in the Platte Valley playing “musical farms” as his father rented a different farm each spring. The early 1940’s saw the purchase of the family farm east of Sumner, NE where Spike started high school. In 1949, he graduated from Overton High School. He attended Kearney State Teacher College for two semesters before going out and teaching in rural schools for two years prior to the outbreak of the Korean War.

In January 1953 Spike entered a Naval commissioning program, completed pilot training, and was officially commissioned in the United States Marine Corps. After the signing of the Armistice, Spike was honorably discharged and went to Mexico City with designs on Medical School. In September 1955, Spike came to Chadron where he attended Chadron State College. He married Ival LaVerne “Babe” Cork on February 23, 1957, and to this union 3 children were born: Cameron Lee in 1967, Catherine Hester in 1969, and Michael Ian in 1971.  Spike and Babe taught school in Wanblee, SD, and then in various places in Wyoming and Nebraska before returning to the Jones family farm in the early 1970’s.  After they sold the farm,  they returned to teaching, which brought them to Rushville in 1981. Spike then focused his vocational energies on trucking until his retirement in 1994, when he was elected Mayor of Rushville and served 3 terms. Babe retired from Shannon County Schools in 1998.

Spike leaves his wife of 56+ years, 3 children, 6 grandchildren and many friends to mourn his loss.

It could be said of Spike Jones that he was on a sympathetic, yet unflinching quest for Courage, Grace, Integrity, and Generosity.

In lieu of flowers, memorial donations can be made in Spike’s name to: Rushville Veteran’s Service Office, C/O Gary Sones

Memorial Service will be at the Rushville American Legion Hall Thursday February 6, 2014 at 11:00 am, with luncheon to follow.  Interment will be at Ft. McPherson National Cemetery Friday February 7, 2014 at  1:00 p.m.