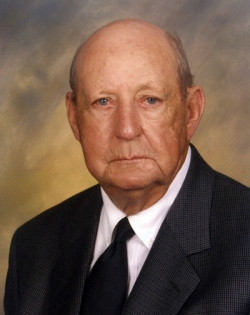 On February 2nd, 2014, Donald R. Hagel, M.D passed away in Jacksonville, FL. He was born in Omaha, NE on February 18, 1924 and was raised in Rushville, NE. He attended public schools in Rushville and was active in all high school sports, especially football, and received All State honors in 1942. Don graduated from Rushville High School in 1942 and enrolled at the University of Nebraska in Lincoln.

He joined the Army Air Force Reserves on December 13, 1942 and was called to active duty on February 22, 1943. In December, 1943 he was commissioned as a 2nd Lt. and was assigned to the 730th Bombardment Squadron, 452nd Bombardment Group and piloted B-17 heavy bombers from Deopham Green, UK. He flew 39 bombing missions over France and Germany including support of the D-Day invasion and bombing raids on military and industrial sites.

Before going overseas, Dr. Hagel married his high school sweetheart, Bette Lou Wefso, on August 27th, 1944. After his return from Europe, they returned to Lincoln and he re-entered the University of Nebraska as a pre-med student. In 1947 they moved to Omaha, NE where he entered the College of Medicine. Dr. Hagel received his Doctor of Medicine degree in 1951 and completed his rotating internship at the University Hospital in Omaha in 1952. He completed residency Ob-Gyn programs in St. Luke’s and St. Vincent Hospitals in Jacksonville, FL and six years of preceptorship with Dr. Joseph Coudon. He then joined partnership with Dr. Coudon.

Dr. Hagel served as President of the Jacksonville Hospitals Educational Program from 1974-76, Secretary of St. Vincents Medical Staff from 1967-72, Chief of St. Vincents Medical Staff from 1972-73 and Chief of St. Vincents Ob-Gyn Dept. from 1976-82. In 1984 he retired from obstetrics (Having delivered over 14,000 babies) and from the practice of gynecology in 1988. At that time he joined the Duval County Public Health Unit as Senior Physician and developed The Women’s Health Service. He also served as Clinical Assistant Professor of Ob-Gyn at the University of Florida College of Medicine. In 1989 he received the HRS “Physician of the Year” Award.

Dr. Hagel was a member of many medical societies, a member of Rotary International and received a Paul Harris Award in 1976. He was also a long-time member of the Timuquana Country Club. He was a communicant of St. Marks Episcopal Church since 1952, and served on the Vestry and as a Lay-Reader and Chalice Bearer.

He is survived by his wife of 69 years, Bette, his two daughters, Jennifer Pate (Robert) and Robin Cooper (Brad), and two grandchildren Matthew (Kimberly) and Andrew (Shirley), and his daughter-in-law, Katherine. His son Gregory preceded him in death.

The family would like to thank Drs. Brian and Tea Stephens of Little Black Bag Medical, the staff at Elmcroft of Timberland Park and everyone at Community Hospice for their compassion and care.