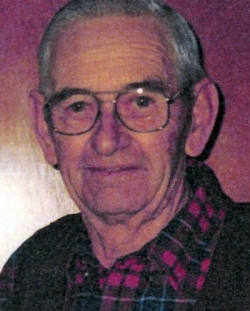 Floyd Lester Downing, Jr., 93, passed away on January 31 at Garden Square of Greeley in the presence of his daughter, Sharon, and the loving care of the staff at Garden Square and Hospice, where he had lived since August 2008.

He was born on June 2, 1920 in Rushville, Nebraska to Floyd Leroy Downing and Adrienne Elizabeth Winston. He grew up on the Downing ranch in the Survey Valley outside of Ashby, Nebraska. He is preceded in death by his one brother and four sisters. He met Helen Ruth Coder on January 31, 1941 at a dance in Ashby, Nebraska. They were married on May 17 of the same year. Helen passed away on November 8, 2012, also at Garden Square of Greeley, and where they celebrated their 70th wedding anniversary in 2011. The first 14 years of their marriage were mainly spent working side by side on the cattle ranch. Floyd also learned the building trades of framing, plastering, brick laying, concrete work and had his own business doing that in the Sand Hills countryside, as well as building the family home in Alliance, Nebraska. They moved to Greeley in 1955, where they bought a mobile home park with Helen’s sister and husband, and Floyd went to work for Hensel Phelps, where he stayed for 27 years. He worked on several projects for them in Greeley, Fort Collins, Vail, Denver and Colorado Springs.

In 1958, they bought a home on Sunset Lane in Greeley where they remained until 2008, again Floyd remodeling many of the neighbors’ homes. Many “vacations” were spent going back to Nebraska to help his parents and Helen’s parents with “work” on the farm and ranch. When he “retired” at 62, he continued to work helping others to build or remodel. He and Helen enjoyed raising a garden and the harvest from it, having friends over to play cards, and hosting many relatives. He loved fishing and bird hunting. They also never missed an event that included their daughter or grandchildren.

He is survived by his daughter, Sharon Downing of Fort Collins, grandson, Ron Mayer of Kansas City, and granddaughter, Christy (David) Moran and great-granddaughter, Stella of Arlington, Virginia. He is also survived by five step-brothers: Burr Jamison of Ashby, NE, Dean (Joann) Jamison of Gordon, NE, Boyd “Puzz” Jamison of Alliance, NE, Bob Jamison of Lake of the Ozarks, MO., and Bud Smith of Sheridan, WY. Also surviving is wife Helen’s brother, Clarence (Doris) Coder of Pierre, S.D., and sister, Alice Myers of Gainesville, GA., and many nieces and nephews across the country. Floyd’s saddle and chaps that he bought new in 1936 and kept in good shape over the years is now in the Old Cowboy Museum in Gordon, NE., on a stand with his father’s saddle (the stand was made by Burr Jamison). Floyd touched the lives of many people over the years and will be missed but remembered with fondness.

Funeral service will be at 12:00 noon Saturday, February 8, 2014 at Stoddard Funeral Home. Private family interment will be at Sunset Memorial Gardens.

In lieu of flowers, memorial contributions may be made to Garden Square of Greeley or Accent Hospice both in care of Stoddard Funeral Home, 3205 West 28th Street, Greeley, Colorado 80634.