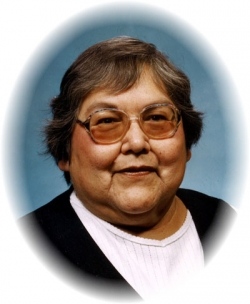 Georgienne Fish was born on Oct.15, 1943, and spent her youth near growing up near Martin, SD. She was baptized in Pine Ridge, SD and attended country school at Lessert School in Bennett County during her elementary years. Later she attended high school at Martin, SD. There she made many friends and involved in many activities. She enjoyed music and played the saxophone, accordion, guitar and bass guitar.

She married Eugene Fish on Nov. 25, 1961. They lived near Lakeside, NE and later moved to Merriman, NE area. Georgienne and Eugene had two children, Faron and Mark, which they raised in the area. Georgienne was involved in her children’s activities including 4-H, rodeos and school activities. During the time she was raising her children she attended Chadron State College and graduated with a B.S. in education on Aug 7, 1975.

Georgienne taught various aged children in Bennett County for over 30 years. Throughout her life she enjoyed activities with her children and later her grandchildren. She also enjoyed sewing, making quilts and clothing for her family.

She is remembered by her friends and acquaintances as a person who had a positive outlook on life and shared a laugh and smile with everyone she met.

Burial service was at Our Lady of the Sacred Heart Cemetery, Martin, SD.