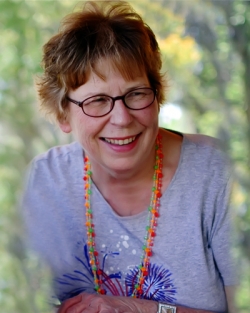 Marlene Mae Nollett, 62, of Martin, S.D., died Friday, February 28, 2014 at St. Mary’s Hospital, Rochester, Minnesota, of heart failure related to lymphoma she suffered in 1979 and complications resulting from the treatment at that time.

She was born April 17, 1951 to Ted and Doris Davis Hauck, in Martin, South Dakota. She attended Martin elementary and graduated from Bennett County High School in 1970. Marlene served for several years as a teacher‘s aid at Martin Grade School before attending Chadron State College where she received a Bachelor’s Degree in Elementary Education in 1982. She began her teaching career at Martin Grade School that same year and continued to teach and to further her education, receiving a Masters Degree in Elementary Education in 1990 from the University of South Dakota. Marlene was currently serving as a reading specialist and worked with children up to the time of her death, culminating a 32-year teaching career at Martin Grade School.

Throughout her life, in addition to teaching, Marlene assisted in her husband’s family business ventures. She was involved in her children’s activities, serving as a cub and boy scout leader for her sons’ troops, worked on 4-H leadership projects with her daughter and club members, was a member of St. Katharine’s Episcopal Church, and currently served as secretary of the American Legion Auxiliary Post #240, of which she was a life-long member. She taught summer school during various summers and taught several classes at Lakota College.

Marlene relished life in her community and was a caring and compassionate volunteer. She took great pleasure in contributing food (delicious pies!) and assistance to those in need. She had a passion for her grandchildren and for quilting, and shared her knowledge and enthusiasm with her granddaughters when they visited and during times spent in Kenosha. Before illness made travel difficult, she spent many happy days with Katie’s family in Kenosha and with her sister and family in Boulder, enjoying several trips together and attending quilt shows and workshops. Marlene treasured her family and her friendships and she was loved and respected -- those who were fortunate to have known her will share great sadness in her loss.

In addition to her immediate family, Marlene is survived by her sister DiAnne (Win) Franklin Jr. of Boulder, and their daughters Michelle (Tim) Brandon and sons Quinn and Walker, and Mollee (Dennis Sanner) and children Finn and Poppy Rose, and by her sister-in-law Mary Lou Kerr of Valentine, Nebraska, and her children and grandchildren. She was preceded in death by her parents and sister, Joan (Tony) Plooster.

Services will be at 1:30 p.m. on Thursday, March 6, at the Old Legion Auditorium with Father Bryan Sorensen officiating. Honorary Pallbearers are family members and friends in attendance. Inurnment will follow at Martin Community Cemetery. Memorial donations in Marlene’s honor may be made to the American Diabetes Association, P.O. Box 11454, Alexandria, VA 22312 (via e-mail at www.diabetes.org) or to the American Legion Auxiliary Unit #240, c/o Kathleen Kocourek, Treasurer, 29418 206th Avenue, Martin, SD 57551.

Bennett County Funeral Service is in charge of arrangements.