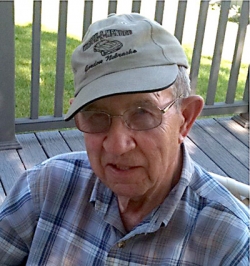 Wayne was born October 12, 1925 in a house across from the Gordon Methodist Church. He attended several one room country schools. As a youngster, he was often sent to stay with his Grandparents because his older brother Bud and younger brother Dean picked on him. He earned the nickname “Bump” from all the welts and bruises his brothers gave him. He attended 7th and 8th grade at Pleasant Hill School, before entering Gordon High School where he graduated in May 1943.

At the age of 17, Wayne enlisted in the Navy in Denver, Colorado, and attended boot camp in Farragut, Idaho and later Radar School at Point Loma, California. In July 1944, he shipped out for Rosneath, Scotland on the USS LaJune. Upon arriving in Scotland, he was ordered by the Navy to stow his sea bag and pick up an army uniform, (This nearly broke his heart!). He was given a special security clearance and left for France, where he would work on several different assignments.

His first orders were to try and find a large German railroad gun in the French Alps. His map was inaccurate and he didn’t speak French, and was therefore unable to find the gun. Wayne was next sent to Paris to determine how much damage was done to the Eiffel Tower, after the Germans tried to destroy it. He was able to climb part way up the west side of the tower, while under sniper fire, and found only minor damage. He was then sent to Heidelberg, Germany to locate and pick up a new technology jet engine, built for a German fighter plane.

Wayne’s most telling assignment in WWII was when he was sent to the German concentration camp in Dachau, Germany, the day after the camp was liberated, to search for the medical experiment files of Dr. Sigmund Rascher. Dachau was the German “death camp” where some of the most brutal human experiments took place. Dr. Rascher’s experiments included high altitude and hypothermia tests. The purpose of the project was to establish the most effective treatment for victims of immersion hypothermia. These deadly experiments by Dr. Rascher, and many other Germans were judged to be inhumane and criminal during the Nuremberg Trials. Unfortunately, the look of death and fear that Wayne saw in the eyes of the many piles of dead prisoners at Dachau haunted him for the rest of his life.

Because of his security clearance and proven ability to get things done, he was tasked to assemble and deliver documents to Nuremberg (where the war trials were starting). He and his jeep traveled throughout Germany for several weeks on each assignment. When he stopped to rest he always took the distributor cap off of the jeep, so that no one could steal it. He next received orders to Berlin and met General George Patton for the third time and was asked by the General to join his staff. Wayne declined the offer, because he wanted to return to the states and help his family after the war. Shortly, thereafter, he received orders to return to the states. Before he disembarked from the ship, he threw his army bag into the sea and threw his Navy bag over his shoulder.

After returning to Gordon, Wayne joined the family business and helped build Gordon Transfer. He also met Ila Mae Fitch, and they were married December 12, 1947. They had two children, Wynn Lewis Coon and Christy Arlene Coon. After 31 years of hauling cattle and selling feed, the Gordon Transfer was sold and he joined the First National Bank of Gordon. He retired from banking after sixteen years.

At a very early age, Wayne took the responsibility of hunting and fishing to help feed the family during the depression. This led to his love of the outdoors and he was an avid hunter and fisherman his entire life. His favorite fishing companion was his father-in-law, Al Fitch. Al always said, “The key to being a good fisherman was catching fish big enough, that you didn’t have to lie about their size.” Wayne rarely had to lie, he was just that good of a fisherman. He always had a black lab and enjoyed hunting with his good friend Rusty Thorp, and others in and around Gordon. Many of the wild stories he told about hunting with Rusty were mostly true!

Wayne especially liked playing cribbage with his best friend Bruce Moore, and they had many “heated” games over the years. They were both passionate “Big Red” fans and great arm chair quarterbacks.

Memorial services were held Saturday March 8, 2014, 10:00AM at the United Methodist Church in Gordon, with Reverend Abigail Eltzroth officiating. Inurnment was held in the Gordon Cemetery with full military honors. Chamberlain-Pier Funeral Home was in charge of arrangements.

Wayne was preceded in death by his mother and father, his wife Ila Mae, three brothers, and his Granddaughter Kori Coon.

A memorial has been established for the United Methodist Church or the Gordon Volunteer Fire Department and donations may be sent to the First National Bank, PO Box 290, Gordon, NE 69343