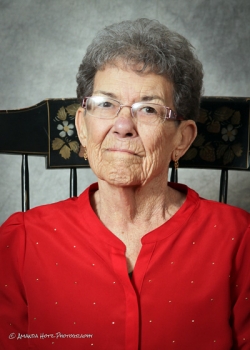 Nadine (Hoagland) Retzlaff was born December 20, 1928 in Chadron, Nebraska to Walter and Hazel (Manchester) Hoagland. As a toddler, the family moved to Rushville, and Nadine graduated from Rushville High School in 1945.  After graduation, she worked for Dr. David, an optometrist in Rushville.  It was there that she met Harold Retzlaff and on September 2, 1947 they eloped to Raton, New Mexico.  Within a few years, Clinton, NE would be home forever, and for the rest of her life she was a full time wife and mother to Kerry, Keith, Kendall and Kristi.  Although she was involved on a few boards, committees, and enjoyed Friday morning bowling, she devoted most of her time to family, cooking, gardening, and was an avid reader.  She was one of the Cornhusker’s greatest fans, but was only content watching if they had a 40 point lead.

After Harold’s retirement, Harold and Nadine spent many winters in Desert Hot Springs, California, and met Butch and Carol Potterville, who would become and remain very dear friends.

Nadine was grandma to 10 grandkids, and it was Ayden that gave her the name “Gramma Dine”…which most of the grandkids continue to call her.  Grandkids and great-grandkids events and birthdays were a highlight of her life, and usually meant getting to travel and go shopping.  Nothing made her happier than to teach her granddaughters how to make noodles, or her famous fried chicken.

Following a battle with cancer, Nadine passed away in Rushville, March 8, 2014. Memorial Services will be held Saturday March 15th, 2014, 11:00AM at the Morse Memorial Methodist Church in Rushville, with Pastor Jason Funk officiating. Inurnment will follow at Fairview Cemetery in Rushville.

Nadine was preceded in death by her “till death do we part” husband Harold, her parents, brothers Harold Hoagland and Donald Hoagland; sisters Helen McNally, Myrtle Gene Closson and Charlotte Fankhauser.

Nadine is also survived by many other close relatives and friends. Niece Karen Jacob wrote the following:  Yesterday my Aunt Nadine lost her battle with cancer. She and her late husband raised four children in a house filled with love and stability that encompassed four generations at the time of her passing. There is sadness in my heart for her and her family, but there is also sadness for what her passing represented. While one circle on Earth has been broken, another circle in Heaven has been completed.  Our life journeys have many stages. Age brings you an amazing perspective. I hope in all of our final days we can find peace with our legacy. Rest in peace Aunt Nadine, your time here on Earth was well spent.

A memorial has been established for the Rushville Modisett Ball Park or the Donor’s choice and donations may be sent in care of Chamberlain-Pier Funeral Home, PO Box 366 Gordon, NE 69343.

Following a battle with cancer,  she passed away on March 8, 2014 in Rushville, Ne.