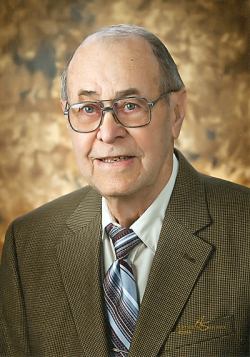 James Burton McCollister went to be with his Lord and Savior December 14th, 2013 Jim was born in Gordon NE. on August 7, 1928 to Wilma (Rash) and Alfred McCollister. He is preceded in death by his parents and one brother, Robert.

He attended school in Todd County, SD, until he was a junior. He graduated from Valentine High School in 1948 the same year he married his wife of 57 years, Mary Anne (O’Neill). He was father of three daughters, Deborah Hammer (Jim) of Pierre, SD , Pamela Markus (Rich)of Valentine, and Elizabeth Lampton (Rick)of Bandera, TX. Jim was grandfather to five grandsons, J.B. Hammer, Chris Hammer, Mike (Leanne) Mulligan, Ryan (Heather) Mulligan, Skyler King. One grand daughter Brianne Olive and several great grandchildren.  He was employed by Skelly Oil for many years and also worked for his father atValentine Beverage.  In 1971 he became owner operator of Valentine Beverage and was affectionately known as ‘Bud Man’. Jim retired in 1995 but enjoyed hunting, fishing, golf, bowling, pitch and cribbage. He had and loved many dogs and took joy in training them for hunting. He had a passion for rifles and guns and spent hours checkering many a gun stock. Jim was a lifetime member of NRA and a longtime supporter of Ducks Unlimited. He gave each grandson a shotgun and enjoyed taking them shooting and hunting. He lived at Cherry Hills Assisted Living Facility from May, 2013 until November. In his final days, Jim was cared for by the loving staff of Pine View Manor Good Samaritan of Valentine. He will be dearly missed by his family and friends.

Memorial service for Jim McCollister will be on Friday, March 28 at 1:30 PM at St. John’s Episcopal Church in Valentine. Inurnment will follow at Mount Hope Cemetery in Valentine. Sandoz Chapel of the Pines is entrusted with service arrangements.