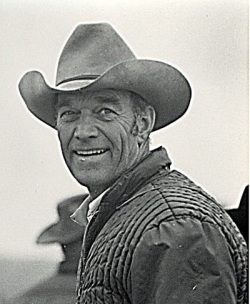 Edson, the only son and fourth child of eight was born to Edson, Sr. and Jessie (Eskew) Gale at their ranch home south of Cody, NE on December 6, 1925. His passion for ranching began at an early age when he was old enough to bring the milk cow to the barn horseback. He and his sisters never lacked for excitement growing up. Their childhood antics of smoking behind the burn barrel, spraying the hay crew’s shaving cream around the bunkhouse and drying their clothes on the windmill wheel in hopes of not getting caught swimming are still laughed about today. Edson started work in the hayfield when he was about nine years old driving the stacker team. He attended elementary school at Cutcomb Lake and graduated from Valentine High School. Edson loved sports and played football and basketball in high school. He and three of his buddies were known as the “four horsemen” because of their strength on the line in football. Edson boarded out with others in Valentine during high school and helped at the Carr ranch on weekends, as it was too far to return home. He joined the Presbyterian Church in high school.

Due to his father’s poor health, Edson began managing the family ranch with his mother as soon as he graduated from high school in 1943. He married Barbara Kime on January 1, 1947. They had three children. Garrett Lee was born in 1957 and Janet Kay in 1961. Judy Ann was born premature in 1966 and passed away the next day.

Edson was a rancher in the truest sense of the word. He took pride in taking good care of his cattle and the land they grazed. His common sense, his willingness to work hard and live humbly allowed him to add to his father’s ranch holdings and build his cowherd. He trailed cattle to Cody to be put on a train for market and worked horses in his early years on the ranch. He was excellent with a rope and there wasn’t anything he couldn’t fix, from windmills, fences, and tractors, to the kitchen sink and the washing machine. He worked elbow to elbow with his brothers-in-law, children, son-in-law, nephews, grandchildren and numerous employees. There was never a chore beneath him and his easygoing manner made him a pleasure to work with. His honesty and unwillingness to take advantage of others was exemplary.

Although ranching was his passion, he still found time to enjoy his family. He had a soft spot for his wife, kids and grandkids, sisters, nieces and nephews. He seemed to be able to arrange the ranch work around family reunions, weddings, graduations and his family’s 4-H and sporting events. Ranch work stopped for Nebraska football games and winter afternoon coyote hunting.

Edson served his community as local school board and fire district secretary, 4-H leader and Cherry County Fair Board member, all for many years. He was named Cattleman of the Year by the National Chianina Association and was inducted into the Nebraska Sandhills Cowboy Hall of Fame. He was involved in the daily activities at the ranch until his health no longer allowed him to be active at the age of 85. He was lovingly cared for at Gordon Countryside Care in his final days.

He was loved and respected by his family and by those who called him “friend”. He will be greatly missed by all.

Preceding him in death were his parents, two sisters, Manota Tate & Jessie Wobig and his infant daughter, Judy.

Funeral service for Edson Gale was held on Saturday, April 5 at the Cody High School Gymnasym in Cody, NE. Rev. Kurt Busenitz officiated at the 2:00 PM service. Burial followed at the Prairie Lawn Cemetery in Cody. Sandoz Chapel of the Pines in Valentine was entrusted with service arrangements. Memorials maybe made to the Tristate Cowboys Association.