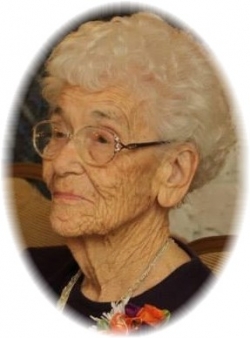 Hazel E. Fankhauser, 92, passed away Monday, May 5, 2014 at Box Butte General Hospital. Hazel was born on December 12, 1921 to Forest and Germaine (Pochon) Orr in rural Sheridan County, Nebraska. Hazel grew up on a ranch south of Rushville and graduated from Rushville High School. After waiting 4 years for Ralph Fankhauser (the love of her life) to be discharged from the Army they were married August 31, 1945 and celebrated 57 years of marriage. They were blessed with four children Thomas and Dick Fankhauser, Sally Randall and Lila Austin.

Ralph and Hazel ranched south of Rushville until 1984. Upon retiring, they moved to Rushville and had an upholstery business out of their garage. Hazel enjoyed dancing, playing cards, traveling, and spending time with her family. Her travels included all 50 states, Canada, and Mexico (she even claims to have been to the North Pole). She painted numerous pictures of the sandhills and was a member of the Hobby Club for many years. Hazel was a 50+year member of the Morse Memorial United Methodist Church in Rushville and lifetime member of the American Legion Auxiliary. Some of her church activities included making doughnuts for and with the MYF fundraisers.

Hazel moved to Alliance to be closer to her family after Ralph passed away in 2002. She lived with her daughter Sally until January 2014, when she moved to the memory unit at Highland Park Care Center.
Hazel was preceded in death by her husband Ralph, her brother Garvin Orr, and son-in-law Gary Randall.
Hazel is survived by her brother Guy (Bonnie) Orr, and her children Thomas (Bette Lynn) Fankhauser of Decatur, Illinois, Lila (Doug) Austin of Greeley, Colorado, Sally Randall, Dick (Bonnie) Fankhauser all of Alliance, Nebraska.

A memorial has been established for the Morse Memorial United Methodist Church in Rushville, Nebraska on Hazel's behalf