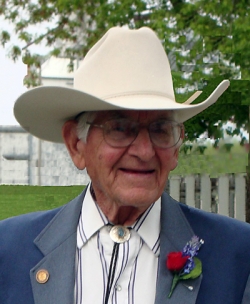 Myron John Jacobson was born in Clinton, Nebraska on July 3, 1922 to Sophia (Bauer) Jacobson and Henry Jacobson.  Myron helped his parents work the farm and lived most of his life on the homestead of his parents.  He attended school in Clinton, Nebraska.  After graduating from Clinton High School, he lived in Denver and worked at the Swift packing house. He then returned to Nebraska and was then married to Virginia Alice Burleigh for over 50 years.

From the days of living in a small cabin on a creek north of Rushville, Nebraska, surviving the ’49 blizzard, to the current homestead south of Clinton, Myron and Virginia devoted their entire life to farming and ranching and the raising of their six children.  Myron was very involved with the Angus Association as well as the Masonic Lodge, from which he received his 50-year pin.  Myron and Virginia also loved attending the Clinton Methodist Church where they were members.

Myron worked his entire life in the development of his farming and ranching business.  His hard work and dedication was evident in the quality of his cattle.  He will be remembered as one of the true cowboys of the time.  Blessed with good health, he was still shoveling grain at the age of 85.  Following a battle with cancer and heart problems, he passed away May 12, 2014, in Hemingford, Nebraska.

Myron was preceded in death with the passing of his son, Dennis, and his beloved wife, Virginia.  He was also preceded in death by his parents, brothers Ted, Leonard, Don, and John, and sisters Ethel, Marjorie, Doris, Irene, Helen, Erma, and Bernadine.

Myron shared his thoughts with one of his children during his battle with cancer, “I’ve had a wonderful life with blessed health, loving family and friends.  When it is time for my life to be over here on earth, I can only have nothing but gratefulness in passing”.  We will dearly miss Myron, but have peace knowing that he is now with the dear Lord above and with all his love ones that have passed.

Memorial services were will be held Wednesday May 21, 2014, 10:00 AM at the Clinton Methodist Church, with Reverend Abigail Eltzroth and Reverend Dillon Hess officiating.  Inurnment burial was held in the Gordon Cemetery.

A memorial has been established for the Clinton Methodist Church in Clinton, Nebraska.  Donations may be sent in care of Chamberlain-Pier Funeral Home, PO Box 366, Gordon, NE 69343.