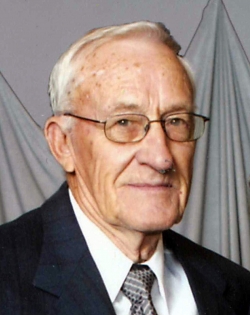 Wayne grew up on a ranch 17 miles North of Lakeside and graduated from Rushville High School in 1948.

He served in the United States Air Force from Jan 1951 to Jan 1955 when he was honorably discharged.

Wayne returned to the family ranch in Lakeside, NE, where he continued to ranch for the next 51 years.  He retired from ranching in 2006 and moved to Chadron, NE.

Wayne was a member of Chadron United Methodist Church, Life member of the American Legion, and Elks.  He enjoyed bowling, golfing, training horses, and raising cattle.

He knew no strangers and was friends with everyone he met, always willing to help out.  Preceding him in death are his parents Homer & Stella Speer and brother-in-law Tom Vandel.

Service was held at 10:00 am Saturday, May 17, 2014 at Chadron United Methodist Church, with Dr. Reverend Mark Crist and Reverend Al Trucano officiating.  Burial with Military honors was at Fairview Cemetery, Rushville, NE.

A memorial has been established for the American Heart Association and the Chadron United Methodist Church.  Donations may be sent in care of Chamberlain Funeral Home, Box 970, Chadron, NE 69337.