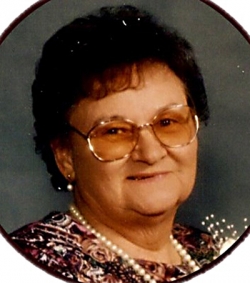 Polly Anna Morton Kreitman was born to Albert and Sadie Hartman Morton August 25, 1920 in Omaha, Nebraska.  She passed away May 13, 2014 at the age of 93.  She was a resident of Gordon Countryside Care for 1 year.

She lived many places in her life.  Polly attended school in O’Neill, NE, for 10 years.  They moved near Bassett in 1936 where she attended Rock County High School.  She drove her parents to California and around the country while she was still a teen.

On February 27, 1939, she married Marvin L. Kreitman at Springview, NE.  They lived in Wayne, then Bassett.  Their first daughter, Shirley was born in Bassett.  Omaha was the next move where their second daughter Winnie was born.  Marvin and Polly farmed by Madison, Nebraska for several years where their son Warren Dean was born.  In 1948 they moved to a ranch south of Bassett.  In 1957 they moved to Long Pine, NE for 3 years, then to Bassett for 2 years before settling back on the ranch until 1968.  At this time they bought a farm nearSwanville, MN, where they lived until Marvin’s death in 1979.  For 10 years Polly enjoyed playing cards, driving ‘old’ people and helping others however she could.  She took trips toCanada, Australia, New Zealand, Hawaii and many parts of the United States.

In 1990 she moved to Gordon, NE, where she managed the Hacienda Motel for 11 years.  She joined a quilting club, card clubs, the Methodist Ladies Aid and became active in the Rebekah Lodge again.  She volunteered at the museums and helped wherever she could.  For 6 years she was manager of the Thrift Store.  In 2004 she moved to the Gordon Villa where lived until going to Countryside Care.  She enjoyed taking part in the activies, playing bingo and cards.

She was preceded in death by her parents, three brothers, her husband and many brothers-in-law and sisters-in law.

Memorial services will be Friday May 16, 2014, 2:00PM at Chamberlain-Pier Funeral Home, Gordon, Nebraska, with Reverend Abigail Eltzroth officiating.  Inurnment burial is Saturday, May 17, 2014 in Madison, Nebraska.