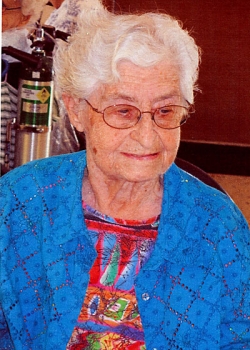 She was born June 25, 1925, in Hay Springs, Nebraska to Merton (Papa) and Wilhelmina (Minnie) Peters Davis. As a young girl they lived in Hay Springs and around 1928 they moved to Bayard, Nebraska.

She attended school at Bayard and St. Mary’s Catholic Girls Academy in Alliance for a short time. In about 1938 they moved back to rural Hay Springs. She attended high school in Hay Springs where she stayed with her grandparents and worked at her uncle’s gas station, Peter’s Bro’s Oil Company, where she worked at the ice cream counter. While attending high school she met her future husband Jim Scott. In the spring of 1942, she graduated high school and in the fall she enrolled in Chadron’s Teacher College (now CSC) and graduated in the spring of 1943. She taught school from the fall of 1943 to spring of 1945.

In January 1946, Jim returned home on furlough and they were married January 24, 1946. Jim returned overseas two days later. In January of 1947 Jim was discharged and they moved to the ranch 8 miles north of Rushville, where they lived until August of 1973, when they moved to Rushville. While living on the ranch their son, J.B. was born September 23, 1947. They lived together in Rushville until Jim’s death in 1999.

Marian taught school full time from 1955 to 1985 at which time she retired from full time teaching, but continued to substitute teach for the next 20 years. Teaching was an occupation that she greatly enjoyed.

She had surgery in 2008 which left her with deteriorating health and in and out of assisted living and nursing homes. In the fall of 2013 she came to live with her son J.B. and daughter-in-law Carol, where she was under the care of J.B., Carol and great-granddaughter McKayla.

Marian was and avid reader, gardener and card player. She especially enjoyed meals and visits with family and the time she had with them. She took great enjoyment in the time she had with her husband Jim and the drives and vacations they took. In later years she had many ‘phone buddies’ and received many cards and letters that she greatly appreciated.

Marian was preceded in death by her husband Jim and her brother Wayne “Buster” Davis. Her survivors include her son J.B., daughter-in-law Carol, granddaughter Melissa, grandson Jason, granddaughter-in-law Kristen and eight great-grandchildren, McKayla, Mitchell, Miles, Maggie, Augustus, Cutter, Eli, Kooper and many friends and family. She was greatly loved by many and will be greatly missed.

Funeral services were held Thursday, June 12, 2014, 10:00 AM at Chamberlain-Pier Funeral Home in Gordon, and burial was in St. Mary’s Catholic Cemetery in Rushville.

The family suggests memorials to the Rushville Rescue Unit and donations may be sent in care of Chamberlain-Pier Funeral Home PO Box 366 Gordon, NE 69343.