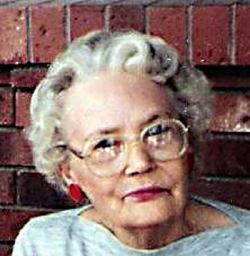 Jenny Dewing, 88 of Loveland, Colorado, formerly of Gordon, Nebraska, passed away peacefully in her sleep at a nursing home in Loveland on June 19, 2014.

Jenny was born to Lester and Claudine (Sanders) Hathorn of Irwin, NE on July 8, 1925 and attended Country School there. She attended Gordon High School until she married Marshall Wayne Wolkins on August 5, 1941. To this marriage was born a daughter Myrna. Marshall was in the Navy and died serving his country. Jenny later married Jim Dewing on January 14, 1944. They were married for 58 years until his death in 2001.

Jenny worked for the Five and Dime Store at age 16 for two years. She was employed at Saults Drug Store for the next ten years and then at Saubs Department Store for twenty years.

Jenny moved to Loveland, after the passing of her husband, to be with her daughter who she lived with for 11 years and loved being close to a grandson and his family who also lived in Loveland. Her favorite pastimes were going shopping in all the stores and listening to big band music.

Preceding her in death were her two husbands, her brother Skeeter Hathorn, and a nephew Sean Haslow.

A graveside service will be held Thursday, June 26, 2014, 11:00a.m. at the Gordon Cemetery in Gordon, NE. In lieu of flowers memorial contributions may be made to the Gordon American Legion Auxiliary and donations may be sent in care of Chamberlain-Pier Funeral Home, PO Box 366 Gordon, NE 69343.