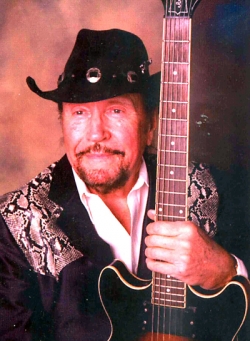 Memorial services for Russ Garner, 82, of Crawford will be held on Monday, July 7, 2014 at 11:00 AM at the Crawford Community Building.  Inurnment with Military Honors will be at the Whitney Cemetery.

He spent decades entertaining people with his unique style and music.  He passed away at his ranch outside of Crawford.  He is loved and admired by all his relatives and many fans.  His music and memory will live on within all of us who love and adore him.

A memorial has been established for the American Cancer Society or the Disabled Veterans of America.  Donations may be sent to Chamberlain Chapel, PO Box 970, Chadron, NE  69337.

Chamberlain Chapel of Crawford is in charge of arrangements.