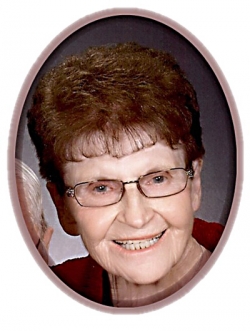 Florine was born in Interior, SD, June 19, 1928.  She lived in Interior with her parents Homer and Pansy Estes until they moved to Martin, SD.  There she met James Martin Kamerzell, her husband of 66 years.  The couple moved to Gordon, Nebraska in 1953 to start their career in the hardware business.  Florine was actively at her husband’s side in their Coast to Coast Store for 42 years.

There was nothing more important to her than her family.  She was an excellent wife, mother and grandmother.  She always had a shoulder to lean on and an ear to listen.  There was never a problem to big to conquer.  Her witty comments and sense of humor seemed to show up when least expected and most needed, sending everyone in to laughter.

Florine was an excellent cook.  She loved cooking Sunday and holiday dinners.  Her kitchen was always loaded with all of the fixings.  Her children and grandchildren always knew where to go when hungry and often called her the “Sugar Granny”.

She was preceded in death by her daughter Dianne Saults, sister Catherine Tompson, brother James Estes and her parents Homer and Pansy Estes.

Memorial services will be held Wednesday July 9, 2014, 10:00 AM at Grace Lutheran Church.  A memorial has been established and donations may be sent in care of Chamberlain-Pier Funeral Home PO Box 366 Gordon, NE 69343.