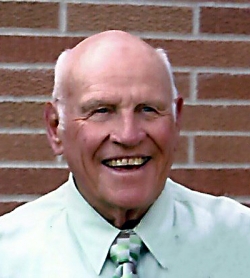 Art and Ruth Bruce welcomed their 3rd born son on January 2, 1927. They formally named him Maurice Clark but everyone simply called him Morey. At the time of his birth, the family was living in a little farmhouse just a few hundred yards off of highway 27 just a mile north of Gordon. Not long after Morey’s birth, the family moved a few miles further north and Morey began public school in the Mt. Pleasant School district northeast of Gordon. Midway through his primary education, the family moved again to a farm 5 miles east of Gordon and Morey finished his Junior High Education at East Pride Country School in the spring of 1939. In the fall of 1940, he entered Gordon High School and graduated with the class of 1944.

At the time of his graduation, World War II was raging in Europe and the Pacific, so Morey enlisted in the Navy in the fall of 1944. His military service was short lived due to medical problems and he received his honorable discharge in the summer of 1945. Returning to Gordon, he began working for Kenneth Hull on the Spectacle Ranch 8 miles northeast of Gordon.

Then in 1946, he traveled to the west coast and lived and worked for a short while in Medford, Oregon and Seattle, Washington. Returning home home after 6 months, he hired on at the Saults Ranch south of Gordon where he remained for the next 3 years.

Always intrigued and interested in leatherwork, Morey moved to Arizona and enrolled in a leather working trade school in August of 1950. He remained in Arizona for a year and a half and then once again returned home where he worked for his father and George Shadbolt south of Merriman.

In the early 50s, Morey began attending the Gordon Church of God and experienced a spiritual transformation by accepting Jesus Christ as his Lord and Savior. It was this decision that guided the rest of his life. While attending the Church of God, he met and began dating Dorothy Thorsen and the 2 were married May 17th, 1953. Over the next 10 years, the couple was blessed with 3 children: Merry in 1955, Sherry in 1959 and Todd in 1963.

After working for the Gordon Lumberyard, Morey was hired to work at the Gordon Coop Grain Elevator and would continue working for the Cooperative for the next 35 years. During this 35-year stint, he served as elevator manager in Cedar Bluffs, Nebraska from 1960 – 1964 and in Brule-Ogallala, Nebraska from 1964 -1971. Then in 1971 the opportunity arose to come back to Gordon and manage the local plant. He remained manager in Gordon until his retirement in 1989.

After retirement, he was active traveling, visiting children and grandchildren, working as campground caretaker for Nebraska Churches of God and most recently operating his own local mowing business.

Soon after celebrating his 60th wedding anniversary, he was operated on for an abdominal aneurism and after the surgery complications arose which he has battled for the last year. Late in June of 2014, he was admitted once again into the hospital where he passed away July 3rd, 2014.

Morey was a gentle and gracious man who was always willing to help others. He had a strong faith and served and worked in the church throughout his adult life. He was active in the community and served as Mayor of Gordon in the mid 70s. He was an active Gideon and spoke in most of the churches in the Gordon area. He loved to work with his hands and did most of his own remodeling.

He is preceded in death by his parents and his older brother Robert Bruce and infant brother Arthur. He is survived by his wife Dorothy and his 3 children: Merry Wheeler and her husband Harlen, Sherry Blumenberg and her husband Tony and Todd Bruce and his wife Lorraine. Two brothers, Dean of Gordon and Bill of Sandpoint, Idaho and 2 sisters Betty Purvis of Burke, South Dakota and Beverly Hatch of Carrolton, Texas. He also leaves behind 8 grandchildren: Zac Wheeler, Matt Wheeler and Jon Wheeler and Jared Blumenberg, Katie Judd, Janna and Jenny Blumenberg and Tori Bruce. Five Great Grandchildren: Madison and Cassidy Wheeler, Gresham Judd, Noah Blumenberg and Claire Wheeler. A host of life-long friends and neighbors.

Services were held for Morey on July 7th, 2014 at the Gordon Church of God. Internment was in the Gordon Cemetery.