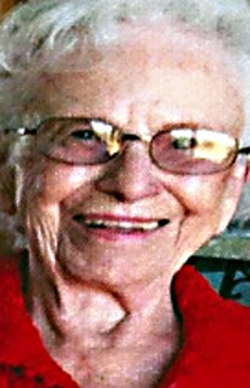 She lived most of her life in the Gordon, Neb., area, leaving to attend business school in Denver, Colo., in 1936. She worked in Denver a few years then met Clinton Hale. They were married in 1940 and moved back to the Sandhills later that fall. They had three daughters: Sharon Kay, Billie LaRene and Vicki Nan. She lost her husband in 1951. She raised her three girls and had many jobs in the Gordon area. She was most fond of the Sandhills and said, “You can take the girl out of the country but you can’t take the country out of the girl.”

She was an avid card player, especially Bridge, getting two grand slams the last time we played, on June 16. She enjoyed all kind of puzzles and kept her mind active with the daily crossword and the Jumbo from the newspaper. Her grandchildren and great-grandchildren loved to come visit Gram and play a rousing game of “PeggyBoard” (Aggravation). There were so many good memories for all of them surrounding all the activities she loved to do. She was generous to a fault, a role model, counselor, confidant and friend to all of her family and friends. She was an avid reader and in later years enjoyed her Kindle library. Both Sharon and Vicki have many great memories making quilts for the grandchildren with her. She played the piano her entire life and kept track of all of the free cell games she had played on her computer. She surpassed 82,000 games — never wanting to play the same game twice.

She left Gordon in November 2009 moving to Butte, Montana, to make her home with her daughter and son-in-law, Ralph and Vicki Northey. These short 4 Y2 years held many good memories. She died in their home on July 5, 2014, at the age of 96 years and 21 days old. She was preceded in death by her parents, Nan and HT Waddill; brother, Irwin; husband, Clinton; daughter, Billie Lefler; son-in-law, Richard Muck; and grandson, Richard Lee Muck.

Cremation has taken place and services will be held in Gordon at a later date. Memorials may be given to donor’s choice or to the Billie Lefler Nursing Scholarship fund in Gordon, Neb.

Axelson Alternative Cremation is privileged to serve The Hale Family.