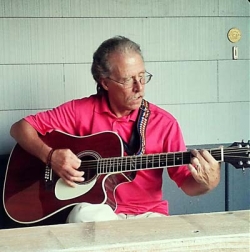 Wad was born on May 3, 1952 in Rushville to Leonard and Marie Milburn.  The youngest of three, Wad lived in a home in Rushville and attended Cravath Elementary and Rushville High School.  While in high school, he greatly enjoyed playing clarinet for the Rushville High bands, and received many honors such as the John Philip Sousa award—the highest band award anyone could receive during high school.  He was a member of the All State Band in 1970 as 1st chair clarinet and had a solo in the final concert.  Wad wrestled for a couple of years in high school, but his passion was his music.  He spent countless hours in the practice rooms of the high school, and dedicated much of his life to music.

A few summers from 1966 to 1976, Wad helped on the pit crew of his older brother Doug’s drag-racing team, racing “The Pony Express.”  He also raced his own car in later years.  In the summers when he was not traveling the country racing, he was traveling the country performing in his band “Banana Cream Weather Balloon.”

Upon graduating high school in 1970 Wad attended Chadron State College and pursued a Bachelor of Arts in Business Administration.  While in college Wad learned to play guitar in his dorm room.  He started out knowing only a few chords and continued to learn new songs, many of which were by one of his music idols, John Denver.  Wad will forever be remembered performing, playing his guitar, and singing.

Wad always enjoyed good times with his friends.  Many of those “good times” resulted in many empty cans of Pabst Blue Ribbon and Merit cigarette butts.  He quit both bad habits; cold turkey soon after his youngest daughter was born.  When Wad decided to do something, he did it.

After college, Wad returned to Rushville and began working for his dad in what was once the service station at Sides and Milburn Ford.  He worked his way up the ladder to parts man, and then eventually, he and his brother, Doug, took over the family business, Wad “taking care of the front half of the store,” as he put it.  Wad saw the 50th and 75th anniversary of Sides and Milburn Ford.  He assisted hundreds of graduating seniors, parents, and the elderly purchase a car.  He cared for his customers greatly and appreciated their business. Wad understood the importance of treating his customers’ right, the first time and every time. There are countless people who have bought not one, but several vehicles from Wad Milburn.

Wad had two children from a previous marriage; Jessica, born in September of 1975 and Clayton, born in January 1980.  On July 14, 1984, Wad married his loving wife, Carol.  Aside from that day being the day he married the love of his life, he remembered that day as, “One of the hottest Rushville has seen.”  In 1990, their daughter Courtney was born in April. The youngest, Lindsey, was born in September of 1993.  Wad took great pride in his children and all of their activities and accomplishments.  He was not only a businessman, but an even better family man.

Wad was a member of the Rushville Volunteer Fire and Rescue for many years, as well as the Elks, and the Sheridan County Players.  Throughout the course of his life, he enjoyed drag racing, softball, bowling, golfing, playing guitar, singing, acting and chasing around his kids’ in all of their activities.  He will be remembered for his quick wit, a fierce dedication to his customers, and always putting his family first.

The celebration of Wad’s life was held on Thursday, July 3 at 10 a.m. in the Gordon-Rushville Middle School with Reverend Al Trucano officiating.  Final place of rest was at the Fairview Cemetery.

Keeping in mind Wad’s love of music and theater and always ready to help others and his community, the family has set up a memorial to The Historic Plains Theater in Rushville, Nebraska. Wad had some wonderful times in the theater, and often stated “spending time in the theater was therapeutic.”  Therefore, donations may be sent to the Sheridan County Players in care of: Chamberlain-Pier Funeral Home, PO Box 366, Gordon, Nebraska 69343.

Wad’s wife, children and family were his pride and joy. The legacy of Wad’s spirit and his passion for all he did in his life will live on through them.