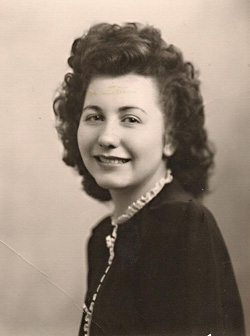 Shirley Lynn Blair was born in Sioux City Iowa, December 21, 1927, the first child of Jean O’Connell Blair and William James Blair. Shortly after the birth of Brother James Eugene, the family moved to Custer, S.D. The addition of sister Bonita June and brother Michael Val Dean expanded the family to six. The time in Custer was happy for the family. The year 1934 brought the family to Gordon, Nebraska, where two more brothers joined the family, Jack Manford and Richard Lee. The 30’s were hard years for the family. Shirley got her first job when she was 12 years old. She was very proud to help her mother in any way she could.

Shirley graduated from Gordon High School in 1945. She worked as school secretary at GHS and later as legal secretary to A.C. Plantz. On Valentine’s Day in 1951, Shirley and Rowena Burleigh were enjoying supper together at the C&L Café in Rushville when a friend of Rowena’s walked in the door. The handsome young Marine joined the ladies and asked if they would like to go with him to the Valentine’s Dance. John always said the minute he laid eyes on Shirley he knew she would be the mother of his children. He was right! John was stationed at Camp Pendleton, California. Shirley joined him there in February 1952. They were married in Santa Ana.

John and Shirley returned to Nebraska in May of 1952. Shirley was happy to be home, and John was happy to return to farming. They were both ecstatic when daughter Kathryn Jean was born that November! Cameon joined the family four years later and Julianne shortly after the family moved into Gordon in 1958. Shirley enjoyed many social and civic organizations, decorating the house and caring for her daughters, who numbered four with the birth of Gaye Cynthia in 1964.

The year 1967 saw another big change when the family moved to their farm southwest of Rushville. Shirley was involved in bridge club, LCRC, and the Methodist Church serving as council secretary for ten years. Shirley cut back drastically on her social agenda, however, as much of her time was spent knocking down walls, sheet rocking, painting, spackling, cleaning, gardening, doing fieldwork, mowing, truck driving, canning, caring for her mother and keeping after her four daughters. One summer day, Shirley decided to frost her hair. When John came in from the field he said, “Shirl, I think being out on the tractor is really damaging your hair. Maybe I shouldn’t make you do it anymore.” Shirley dyed her hair back to brown and never tried highlights again.

By 1977, the house was remodeled, kind of, and the girls were self-reliant, more or less. Shirley began taking classes at Chadron State College majoring in Criminal Justice with a minor in psychology. She also enjoyed her arts and humanities studies. Shirley and John traveled more often, visiting Shirley’s sister and brothers and visiting their daughters, helping with grandchildren.

In 2008, due to health issues, Shirley moved into Pioneer Manor. John joined her there in 2011. They were very happy to be together once more as they are now.

Shirley died Wednesday, July 9, 2014. Funeral services will be held Monday, July 21 at 2 p.m. at the Morse Memorial United Methodist Church in Rushville, Neb. Visitation will be Sunday, July 20 from 5 p.m. to 7 p.m. at the Chamberlain-Pier Funeral Home in Gordon, Neb.