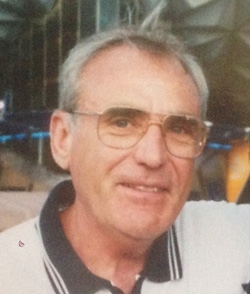 Graveside services for Larry Novotny will be held on Thursday, July 17, 2014, at 10:00 a.m. at the Hay Springs Cemetery with Father Joseph Joseph officiating.

Larry was born in Rushville, Neb. on December 18, 1939, and passed on July 13, 2014, in Fort Collins, Colorado. He was a loving son, husband, brother, father, grandfather, great grandfather, friend, fisherman and railroader. Larry was surrounded by his family at the time of his passing. Born to Charles L. Novotny and Violet L. Ewing, Larry was one of seven boys raised on the Novotny Family Farm located northeast of Hay Springs, Nebraska. Larry and the love of his life, Claudette May Novotny (Crandell-Card), whom he met at the age of eighteen lived at times in Chadron, Ravenna, Alliance, Minatare, Gering and Fort Collins, Colorado.

Larry was survived by loving wife, Claudette May Novotny, whom he met in Chadron, Nebraska, four children, six grandchildren, and four great grandchildren. Larry was preceded in death by one brother, one grandchild and his parents. Larry devoted his life to his family and friends and was known to give the shirt off of his back to a perfect stranger in need. Larry will be greatly missed by all as the world has lost a great man.

In lieu of flowers, the family requests donations be made to the American Lung Association. Donations may be sent to Chamberlain Drabbels Mortuary, PO Box 443, Hay Springs, NE 69347.