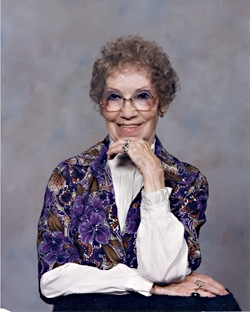 Lois was born Lois Florene French in Carlisle, Ind., October 1, 1915, to Carl and Reva French, the oldest of four children. She lived in Sullivan, Ind., graduating from Sullivan High School in 1934. While in Jr. High she met William Murphy (Murph) Draper, and after her high school graduation they were married June 5, 1934. They celebrated 52 years together having two children, Ronald Murphy and Ronda (Ronee) Kay.

In 1955, they moved from Sullivan to Santa Clara, Calif. In early ‘76, they retired to Gordon, Neb., settling on two acres (Draper’s Acres) twelve miles out of town. In ‘86, Murph went to be with the Lord, so Lois moved to Portland, Ore. to watch Ron’s children grow up. In 2001, Lois moved to Reno, Nev. to be with Ronee and her family. In 2007, she spent the last six years visiting back and forth, sharing and loving both families. In 2013, she permanently moved in with Ronee in South Lake Tahoe, Calif.

During her lifetime, Lois was an industrious, sociable church attending lady. While not perfect, “Sot in her ways,” as she put it, she strove to be caring, helpful, kind and faithful to her family and to the Lord.

From her teens to well into her 80’s she was a hard worker in a variety of jobs including grocery stores, food services, shoe saleslady, farming, clerical work, telephone operator, etc. For ten years she worked as a lab technician in the Sullivan Kraft Cheese factory. For 25 years, she worked as a switchboard operator/supervisor in her hometown phone company, two banks, a hospital and a Bible College in the towns she resided. In her later years, she was a caregiver, for the elderly until finally deciding to enjoy her time with her families.

She was a friendly, sociable lady actively involved in community organizations and local churches. She was a member both of the Sullivan and Gordon American Legions, the Elks Club and country clubs, the Red Hat Society, Order of the Eastern Star (Worthy Matron) and the American Business Women’s Association (President).

Wherever she resided she enjoyed and participated in an active church life for her Lord and Savior, Jesus Christ. It began as a child in the Sullivan Methodist Church, as parents in the 1st Baptist Church of Sullivan, Baptist churches in San Jose, Gordon and Portland, The Church in Reno and Hope Lutheran of the Sierras in South Lake Tahoe, Calif. with her last membership at Powellhurst Baptist Church in Portland. Being open to however the Lord would use her she particularly enjoyed ministering to children whether in Sunday School, Children’s Church, A.W.A.N.A.’s or providing child care for the K.H.M. Hebrew Christian Church. Throughout her life she faithfully prayed for the churches, their leaders, members and their ministries.

Lois went to be with the Lord on November 18, 2013. She is survived by her son, Ron (Nancy), daughter Ronee (Art), five grandchildren, Richard, Sean, April, Dan (Jessica) and Heather, six great grandchildren and other family members.

She will be laid to rest alongside Murph at 10:30 a.m., Saturday, July 19 at the Gordon Cemetery. Anyone is welcome to join the family in the celebration of her homegoing.